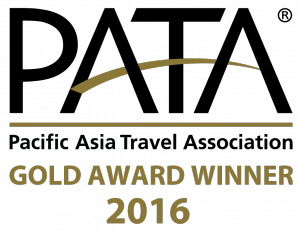 The Pacific Asia Travel Association (PATA) is pleased to announce the winners of the 2106 PATA Grand and Gold Awards. Proudly supported and sponsored by the Macao Government Tourism Office (MGTO) for the last 21 years, this year’s awards recognise the achievements of 26 separate organisations and individuals.

Miss Maria Helena de Senna Fernandes, Director of the Macao Government Tourism Office, said, “The PATA Gold Awards 2016 winners reveal a variety of creative new ways that can be effective in advancing the tourism industry while following sustainable principles, in a valuable contribution to inspire good practices in the tourism industry in the Asia-Pacific.”

Dr. Mario Hardy, PATA CEO, added, “On behalf of PATA, I would like to congratulate the 2016 Grand and Gold Award winners and to thank all of this year’s participants for their submissions. This year’s winners exemplify the values of the Association in working towards a more responsible travel and tourism industry in the Asia Pacific region and we look forward to celebrating their accomplishments at the PATA Gold Awards luncheon and presentation at PATA Travel Mart 2016 in Indonesia.

The PATA Grand Awards are presented to outstanding entries in four principal categories: Marketing; Education and Training; Environment, and Heritage and Culture.

Jetwing Hotels, Sri Lanka will receive the 2016 PATA Grand Award for Education and Training for its ‘A Journey of Hope and Progress – The Jetwing Youth Development Project’. The Jetwing Youth Development Project (JYDP) is an initiative designed to empower rural youth who are underprivileged and do not enjoy the opportunities  for higher education or meaningful career prospects. Providing free training to school leavers from disadvantaged families in locations of Jetwing Hotels around the country, JYDP offers both practical and theoretical training to prepare them for a career in the travel and tourism industry. JYDP enables them to acquire suitable employment within Jetwing Hotels as well as creating equal opportunities for them to find employment elsewhere. As well as providing them with life skills, they also gain valuable exposure to communities beyond their village helping towards positive cultural integration.

The Environmental award will be presented to Marina Bay Sands, Singapore, for its ‘Sands ECO360°’. With the ECO360° Meetings programme, Marina Bay Sands provides like-minded clients with responsible meeting practices as part of its standard services at no additional cost. The programme offers additional options which can help clients to meet their event’s specific sustainability priorities such as increasing the options in the local food harvest menu(freshest ingredients sourced), developing the quality and quantity of the venue’s communications to event participants, producing a complimentary event impact statement and improving the energy efficiency of the MICE building.

The Heritage and Culture Award will be awarded to Tourism Authority of Thailand (TAT), for its ‘One and Only Project in Discover Thainess Campaign’. The TAT organised ‘One and Only Project in Discover Thainess Campaign’ by inviting any foreigners who are interested in Thainess and have experienced Thailand’s traveling to participate in the Project. The participants were required to submit their video clips under the theme of ‘Discover Thainess’, filmed in any of these five topics: Muay Thai, Thai dancing, Thai cooking, Thai flower garland making and Thai language.

Three teams, with two persons in each team, were invited to Thailand to participate in activities related to these five topics. . Video clips of their activities in Thailand  were uploaded daily on www.tourismthailand.org/discoverthainess. Visitors to this website voted to determine the winner.