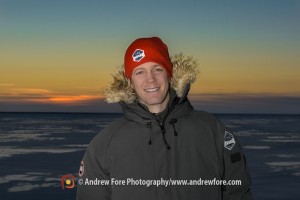 Winnipeg, MB – The company synonymous with popularizing Churchill’s polar bears in leisure travel markets all over the world and sharing with these travelers northern Canada’s wildlife, culture and history is moving confidently into the future under a new generation of leadership. John Gunter was recently appointed President and CEO of Frontiers North Adventures.

“We work hard building world-class travel programs and our goal is to continue to share Canada’s North with more people all over the world,” said John Gunter, who has taken over the company from his parents and founders, Lynda and Merv Gunter. Frontiers North Adventures was established in 1987. “Our adventures attract travellers looking to experience the unique people, beautiful scenery and engaging wildlife of Canada’s North. As stewards, we have the responsibility to ensure our activities positively contribute to these destinations.”

The company specializes in expert-guided adventure travel in Canada and is best known for its Tundra Buggy® and Tundra Buggy Lodge excursions to see polar bears near Churchill, Manitoba, where the company also hosts summer beluga whale-watching and winter Northern Lights adventures.  Other tours include Arctic ocean cruises and wildlife-viewing in Nunavut and British Columbia.

“This company began as a family business. In the beginning, we operated out of our home and I organized and guided our tours. In time Merv managed our Churchill operation,” says Lynda. “I remember John and his sister, Kelly, helping to stuff envelopes we’d send to clients, so he knows how far we’ve come. Today, we’re a much bigger company, with more than 50 employees and a very good reputation all over the world. While it’s nice the company continues to be run by a family member, it’s even better knowing that John’s leadership, expertise and experience will take Frontiers North Adventures to new heights.”

John Gunter joined the company in 2003 after completing a Bachelor of Commerce (Honours) degree at the University of Manitoba’s I.H. Asper School of Business and having worked for some time in the information technology industry. At Frontiers North Adventures he has worked in all areas of the company and has played an instrumental role in developing partnerships with Polar Bears International, National Geographic Magazine, Canada Goose Inc., Hudson’s Bay Company, explore.org and Google. He has championed environmental goals including the development of Frontiers North Adventures’ own Churchill recycling program, and he lead the company’s implementation of a greywater management system on the Tundra Buggy Lodge.

John’s work has lead to Frontiers North Adventures being recognized as Skäl International’s 2009 Ecotourism Operator of the year, the Responsible Travel & Tourism Forum’s 2011 Leadership Award winner, and in 2011 as an inaugural Signature Experience designated so by the Canadian Tourism Commission. In 2014 John was personally recognized as a Future Leaders of Manitoba award winner.

As part of this change in leadership, Frontiers North Adventures also named Jennifer Ash, MBA, CMA as Vice-President, Finance and Operations and Tricia Schers as Vice-President, Marketing, Sales and Media. Jennifer has a background in strategic and operational finance having held positions with the United Nations and NATO. In late 2013 Jennifer joined the Frontiers North Adventures team after having served as Controller for Canadian Forces Base (17 Wing) Winnipeg. Tricia joined Frontiers North in 2010 as Communications and Marketing Manager. Prior to joining the team Tricia was a Regional Director for UNICEF Canada and also served in positions with the United Way and Winnipeg Regional Health Authority. Both Tricia and Jennifer respectively bring over 20 years of experience in their  fields.

“John has a strong commitment to building Frontiers North Adventures in a way that benefits the community and helps protect nature,” said Merv Gunter. “Lynda and I are very proud to hand-over the company to the next generation and can’t wait to see where the future takes us.”