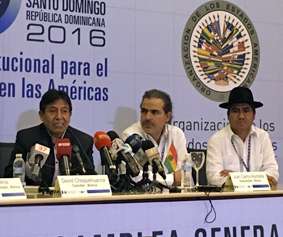 At its meeting in Santo Domingo on June 15, 2016, the General Assembly of the Organisation of American States (OAS) comprising 35 independent states of the Americas adopted the American Declaration on the Rights of Indigenous Peoples.

The Declaration is the first instrument in the history of the OAS to promote and protect the rights of the indigenous peoples of the Americas and has taken 17 years to come to fruition.

Together with the United Nations Declaration on the Rights of Indigenous Peoples, it is a basic instrument for the survival, dignity, and wellbeing of the indigenous peoples of the Americas.

The Declaration recognizes that self-identification as indigenous peoples will be a fundamental criterion for determining to whom the Declaration applies and that:

The OAS recognises that Tourism, both public and private, is one of the principal economic sectors for many member states of the OAS.

The mission of Culture and Tourism Section of OAS is to support the development of tangible and intangible cultural and tourism assets and cement new and established links between the tourism and culture sectors to enhance the contribution of both sectors to economic and social development in OAS member states.