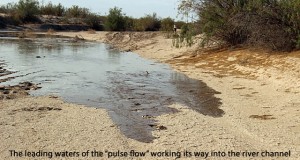 Angels Camp, CA – A binational group of conservationists from the United States and Mexico, along with several O.A.R.S. river guides, joined together last week for a historic 22-mile rafting trip on the newly revived Colorado River at the U.S.-Mexico border.

This “first descent” of sorts (by oar raft) was made possible by the recent Colorado River “pulse flow” experiment which has allowed approximately 100,000-acre-feet of water (less than 1 percent of the annual flow of the Colorado River) to flow south toward the Sea of Cortez for one of the first times in nearly 50 years.

The effort to reconnect the river to the sea, an effort led by a coalition of environmental groups collectively known as Raise the River and made possible by the historic Minute 319 agreement between the U.S. and Mexico, was to recreate a mini spring flood in the river and delta region and restore the degraded and endangered Colorado River delta in Mexico.

The event began on Sunday, March 23, 2014 when the gates of the Morelos Dam on the U.S.-Mexico border were lifted, allowing water that had typically been redirected for upstream water needs to once again flow into the final stretch of the Colorado River.

“The river flow peaked for three days at 4,000 cubic feet per second (cfs) and will drop to 1,000 cfs for the first three weeks of April,” according to environmentalist and longtime Grand Canyon river guide Tom Huntington who was on the ground for the event last week to lead the historic Colorado River “pulse flow” rafting trip.

“Conservationists from both Mexico and the U.S. worked together for years for this opportunity to float 22 miles along the border and witness the rebirth of the river,” said Huntington. “These environmental professionals are among the many who helped the U.S. and Mexico governments foster the Minute 319 agreement which authorized this historic water release and delta restoration plan.”

Those involved with the trip included Dr. Yamilett Carrillo from the Colorado River Delta Water Trust, David Yardas and Jody Olson of the National Fish and Wildlife Foundation, Jennifer Pitt of the Environmental Defense Fund and Eloise Kendy from the Nature Conservancy. Additionally, a team of experienced Colorado River and Grand Canyon guides from O.A.R.S., including Shawn Browning, Chelsea Arndt and Margeaux Besterad, volunteered their time and skill to the trip.

“It was a historic river trip on a newly refreshed Colorado River at the U.S. and Mexico border,” said Huntington. “A place of division has become a symbol of unity.”