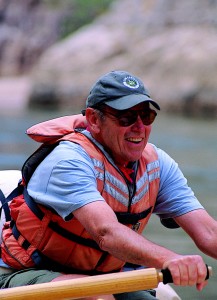 Angels Camp, CA – River conservation group Friends of the River will honor whitewater rafting pioneer George Wendt with the prestigious Mark Dubois Award at the 2012 California River Awards this Friday, October 19 in San Francisco. The event is a gala evening that honors those who have made outstanding contributions to river conservation, preservation and protection.

George Wendt (not to be confused with the famed Cheers actor), founder and president of the O.A.R.S. Family of Companies, co-founder of Sobek and recipient of the Adventure Travel Trade Association’s Lifetime Achievement Award, is a true pioneer in the adventure travel industry. His passion for running rivers was born in the 60s, when he became one of the first 1,100 people to descend the Colorado River through the Grand Canyon. In the decades since, O.A.R.S. has set the standard for first-class rafting, as well as environmentally and culturally responsible travel, on over 35 rivers and coastlines worldwide.

George has run first descents on some of the world’s most legendary rivers, fought to include California’s Tuolumne River in the National Wild and Scenic River System and helped to establish the Upper Navua Conservation Area in Fiji. Wendt has also testified before the U.S. Senate Subcommittee on River Preservation, and through O.A.R.S. spearheads donations totaling more than $70,000 per year to dozens of conservation efforts. He has donated countless hours and river trips in support of youth, community and conservation causes and has helped introduce more than 500,000 people to the beauty of rivers and the natural world.

George is a founding member of the Adventure Collection and a regular speaker at the annual Ecotourism and Sustainable Tourism Conference.  In 2006 George joined producer/director Greg MacGillivray in the Grand Canyon with Robert F. Kennedy Jr. and anthropologist Wade Davis for the filming of the IMAX movie, Grand Canyon Adventure: River at Risk, a story about the global disappearing act of fresh, clean water and wild rivers.

Each year Friends of the River honors an extraordinary person or persons whose efforts recall the spirit that Mark Dubois, Founder and Director Emeritus of Friends of the River, infused into the organization.  The award recognizes those who have taken a leading role in furthering river conservation in California.

1 Comment to O.A.R.S. Founder, George Wendt, to be Honored at 2012 California River Awards