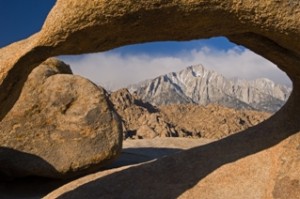 The MapGuide to the Yosemite Gateway, is the first of four regions to be highlighted within the enormous Sierra Nevada. The Yosemite Gateway map shares locals’ secrets of one-of-a-kind coffee houses in historic buildings, spectacular drives without the crowds, deserted mining towns, even details on the upcoming Mariposa Butterfly Festival. More than 800 map point nominations were received from the region’s residents, making the MapGuide a unique resource for the millions of annual visitors as well as for locals seeking unspoiled outdoor places and authentic cultural experiences.

The MapGuide will be unveiled at the iconic Yosemite Lodge, following a meeting of the Yosemite Gateway partners. Sponsoring the map are the Sierra Nevada Conservancy and Sierra Business Council in conjunction with National Geographic. The MapGuide also received funding from the Federal Highway Administration’s Scenic Byways Program and the Morgan Family Foundation.

“The entire world has heard of Yosemite, and rightly so. However, the magic of this MapGuide is that it includes the surrounding Sierra Nevada, a region that deserves to become a household name, too,” said James Dion, associate director of National Geographic’s Center for Sustainable Destinations. “Our commitment is to preserving the enormous scenic and cultural assets of both.” 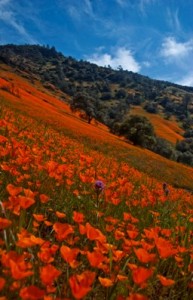 A field of poppies is breathtaking in the Merced River Canyon, on Highway 140 between Yosemite and Mariposa. The wonders of Yosemite National Park are just the starting point of National Geographic’s newest online Geotourism MapGuide, the latest in digital mapping, loaded with interactive features for fun and custom trip-planning. (Photo by Charles Phillips, courtesy National Geographic)

For the purpose of this project, the Sierra Nevada is sectioned into four phase areas. The MapGuide Web site reflects the completion of the first phase in the Yosemite Gateway area and the transition into sequential phase areas. This summer the project will solicit nominations from the Tahoe Emigrant Corridor, which includes the counties of Placer, Nevada, El Dorado, Washoe, Douglas and Carson. The final two MapGuides will guide visitors through the Northern and Southern Sierra regions.

“The breadth of the beauty in the Sierra Nevada is unique. Lassen Volcanic National Park, Lake Tahoe, Yosemite National Park, and Sequoia and Kings Canyon national parks are incredible jewels in this 400-mile-long region,” said Steven Frisch, president, Sierra Business Council. “The Sierra Nevada Geotourism Project is the perfect synthesis of economic outreach to culturally rich communities and respect for the planet.”

“The Sierra is where Californians come to discover, unwind and imagine,” said Sierra Nevada Conservancy Executive Officer Jim Branham. “With the National Geographic Geotourism initiative, visitors will realize that there is so much more to see than they ever imagined, and they will come away from their next adventure with a better sense of connectedness to the Sierra Nevada, its residents and its resources.”

National Geographic defines geotourism as “tourism that sustains or enhances the geographical character of a place — its environment, culture, aesthetics, heritage and the well-being of its residents.”

Dion noted that the online Yosemite Gateway map is “living and breathing, constantly being updated.” Site visitors can add comments, read what others have posted, even hit a key to connect to Facebook or Twitter accounts to advise friends instantly of what they’ve found. It’s not too late to make a nomination for the map; suggestions will be considered for possible inclusion on the WebMap or a print copy to come.

Web site visitors can learn about the John Muir Highway, where they can relive the inspirational transformation that Muir experienced during his first journey to Yosemite Valley. Agritourism suggestions include the Larsen Apple Barn, the oldest (c. 1860) continuously family-owned and -operated farm in the area, featuring produce and such baked delights as Cream Cheese Apple Pie. Also featured are rustic and eclectic accommodations — many too small to make a traditional guidebook — like the Yosemite Bug Mountain Resort & Spa situated on 50 acres of forested hillside. 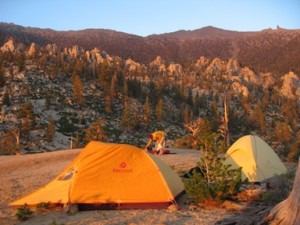 History buffs and adventurers, backpackers and foodies, birders and sightseers can discover destinations based on recommendations from those who know best — residents of the Sierra Nevada.

A major 2002 Geotourism study by National Geographic Traveler magazine and the Travel Industry Association of America found that at least 55 million American adults can be classified as “geotourists” — a strong incentive for scenic regions to protect assets for future visitors.