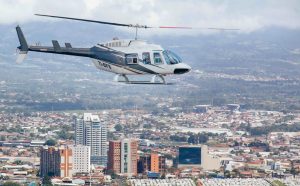 Nature Air was established in 1986 when the small regional airline was purchased by Alex Khajavi and this year celebrated thirty years of service. Now Nature Air Vacations, a division of Nature Air announce new heli tours of Costa Rica. Several options are available, all departing from Tobias Bolaños Airport in San Jose offering a choice to guests.

Rainforest and Volcano Tour – Fly east over La Palma mountain pass to Braulio Carrillo National Park. This park has a good extension of cloud forest, waterfalls and interesting river basins. Then to Río Sucio and west over the towns of Cinchona and San Miguel de Sarapiquí up to the Hule Lagoon. This volcanic lagoon looks beautiful from a helicopter. Fly over the Rio Toro basin upstream with its beautiful waterfalls and then over the Poas Volcano where there are views of the crater. Continue over the Botos lagoon, returning over the City of Alajuela and back to the airport. The flight time is approximately 1 hour. 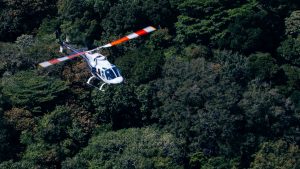 Three Volcanoes tour – Departing from Tobias Bolaños Airport head towards the Arenal Volcano with views of the San Carlos plains from the air, Fly around Arenal and Cerro Chato, an extinct volcanic crater and to the Hule lagoon close to San Miguel de Sarapiqui. From there fly upstream the Toro River to the Poas Volcano, Botos lagoon and up to the active crater. From there on to the Barva Volcano (extinct) with its old craters, now natural lagoons. Then descend and land at Doka Estates for a coffee tour, quick snack or just stretch your legs. (see www.dokaestate.com) before returning to San Jose. This three hour flight is a magical tour of Costa Rica!

Beach and crocodile – fly from San Jose west over La Garita de Alajuela, San Pablo de Turrubares to overfly Carrara Natural Reserve. Fly to the coast starting at Herradura, Playa Escondida, Punta Leona and then to the river mouth of the Tarcoles River and upstream to the bridge where the crocodiles can be seen up close but from the air. The tour is 1 hour. 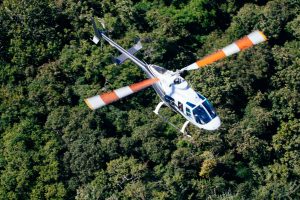 Two Oceans Tour – Fly over lush forests of Braulio Carrillo National Park eastbound to Tortuguero National Park where passengers will board a boat which will provide a tour of the canals, flora and fauna of the area and even take a dip in the Caribbean! Board the helicopter again and head westward to the opposite coast, flying over Arenal Volcano and Lake Arenal, landing at Las Catalinas for lunch. Enjoy a gourmet lunch at the beach club on the ocean before taking a dip in the waters of the Pacific Ocean. The helicopter will return to San Jose and enjoy a freshly made cappuccino upon arrival. This truly unique tour  is approximately 6 hours in length and will remain in your memories forever!