Rolling through the rugged East African landscape, travelers spot giraffes and elephants from a hybrid safari truck. At lunch, they rehydrate with filtered water poured from glass pitchers. They sleep easier at night knowing any carbon emissions their transportation, activities, or accommodations create are completely offset. And everything they do on this guided excursion is supported from a office in Boulder, Colorado, that is crafted with eco-friendly building materials, outfitted with solar panels, and staffed by employees who actively use public transportation, carpooling options, bikes, and their own two feet to get to and from work. 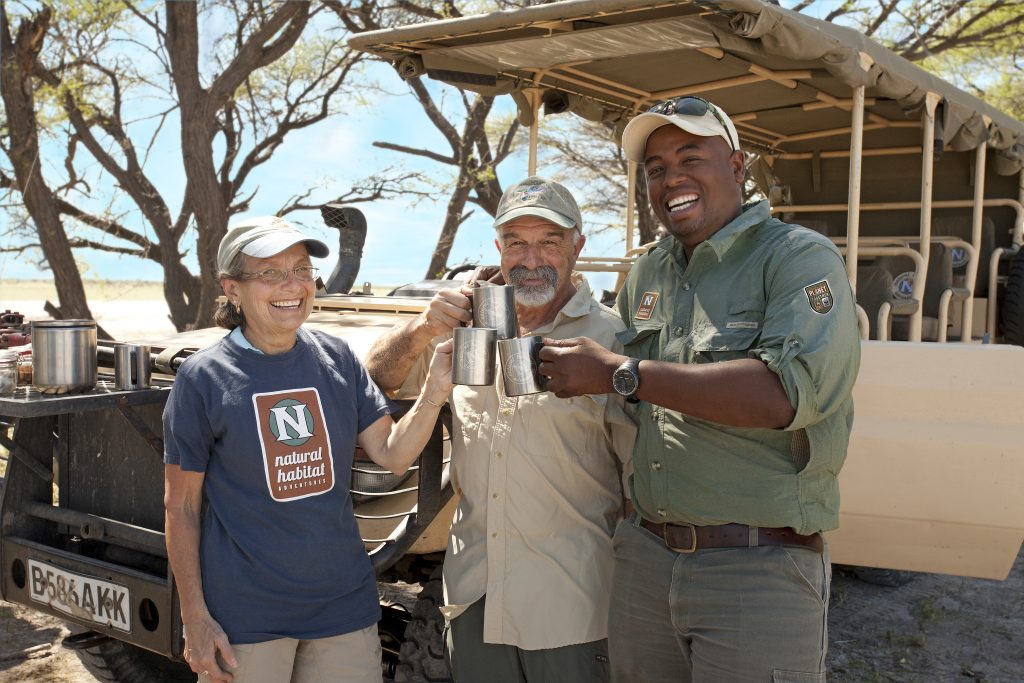 Natural Habitat Adventures is committed to sustainability in all aspects of its business, from its home office to on-the-ground operations. © Court Whelan

But that’s the essence of Natural Habitat Adventures. Since its establishment in 1985, the company, known as Nat Hab, has been a leader in responsible adventure travel. Charting the way with innovative sustainability initiatives while accumulating several awards and accolades in the process, Nat Hab’s employees have also done an excellent job with involving clients in their eco-friendly efforts. “There’s nothing more important about the impact we can have on the planet than what we can do to inspire our travelers,” said Ted Martens, Nat Hab’s vice president of marketing and sustainability.

During Adventure Travel World Summit 2018, Martens outlined three of these initiatives demonstrating how Nat Hab has set the bar for climate action within the industry. In discussing these initiatives, he also explained the challenges of each and how the company overcame these challenges, offering a bare bones blueprint for other companies that are serious about cutting their carbon footprint.

In 2007, Nat Hab became the world’s first carbon-neutral company, an achievement Martens said may be the company’s proudest to date. Nat Hab staff has always felt a responsibility to address the carbon-heavy aspect of the adventure travel sector, and making the decision to eliminate carbon from its operations was an opportunity to make a statement about the issue. “Frankly, we wanted to take a stand, do something bold, and set the bar high, hopefully inspiring our peers and our travelers and our staff,” he said.

To become completely carbon neutral, staff reviewed and measured every energy-consuming activity on the company’s tours and staff retreats, and in the office’s operations. However, even though Nat Hab is committed to its environmental initiatives, one of the things the company quickly realized when launching its full-scale initiatives is that there is an educational barrier about carbon emissions. “If we really want people to engage with this, we have to tell them why it’s important, what the problem is, and what they can do to solve it,” Martens said. Nat Hab has embedded a carbon calculator on its website, included educational materials with its catalog, and offered numerous ways for travelers to offset their flights so guests are empowered to take action, and the company continues to tweak its marketing and communications to optimize traveler buy-in.

Becoming a carbon-neutral company is a significant investment — it cost $66,000 USD to offset these trips last year alone — but it’s a noble investment, Martens said. Since 2007, the company has offset 17,272 tons of carbon dioxide, which is the equivalent of 39,988 oil barrels that were not consumed or nearly half a million trees grown over the course of a decade.

The elimination of plastics has become an increasingly hot topic in the adventure travel sector, but it’s something Nat Hab began addressing in 2008 with full elimination across its operations in 2011. To do so, the company communicated its commitment to all partners and operators and mandated their participation as part of their agreements. Nat Hab also provided resources and instruction on implementation.

When the company first embarked on this initiative, many operators — especially those working in developing nations — simply said it wasn’t possible, and monitoring implementation continues to present a challenge. “We’re eight or nine years into this now, and we still have people messing this up almost every day. It takes continued pressure to make it happen,” Martens said. Putting the commitment in writing, making formal policies, and integrating that documentation into tour operator agreements has been paramount in the company’s success. Additionally, explaining that the company’s decision to go plastic-free is also a traveler preference (as noted in the company’s post-trip evaluation) has helped convince many operators. 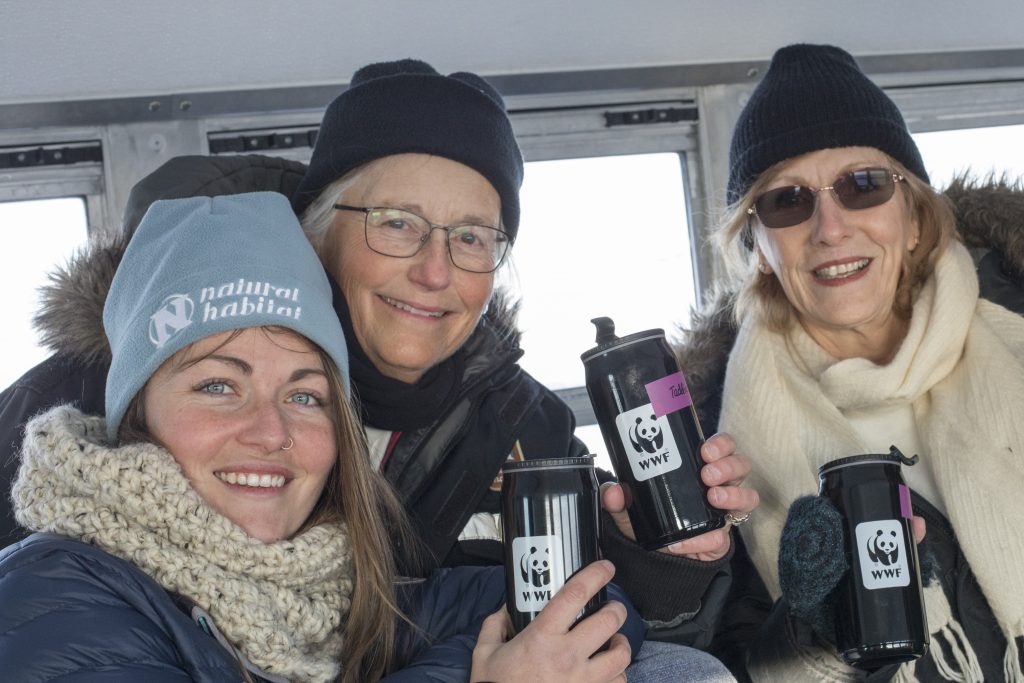 Nat Hab has been free of plastic bottles across its operations since 2011. © Court Whelan

However, just as tour operators presented a challenge in Nat Hab’s efforts to eliminate plastics, so did travelers. “We had some perception issues we had to overcome,” Martens said, noting that those traveling in developing nations were particularly inclined to gravitate toward single-use plastic water bottles. Nat Hab routinely sets expectations in pre-trip materials and reiterates its commitment from the start of every trip. “The single most important thing to do, though, is not about preparing them, but about removing the possibility of engaging with those bottles,” he said. Eliminating the presence of plastic bottles and presenting a pitcher of water at the dinner table sets the tone for an entire trip.

But the efforts are paying off: Nat Hab estimates more than 770,000 bottles have been eliminated since the program’s inception based on two plastic water bottles per traveler per day on each trip. “And we’re not that big of a company,” Martens said. “Imagine if we can all make this happen. Those collective numbers would be pretty awesome.”

No idea is off the table at Nat Hab. In fact, each individual’s interests and passions is paramount to getting new, creative ideas into the company’s culture. “All of us care deeply about our planet,” Martens said. “In everything we do, we consider our conservation impact. It is literally written on the wall of our company that we must continue to be a leader in the realm of conservation travel and continue to raise the bar.” So perhaps it’s no surprise the company’s latest effort to conduct the world’s first zero-waste adventure organically grew from its Green Team discussions.

The July 2019 trip will take place in the Western United States, but Martens notes this effort isn’t about this single initiative. “What this about is thinking about waste management in a broader context,” he said. The Nat Hab team has actively been thinking about, measuring, and learning about waste in all contexts of the company so that these lessons can be applied to other destinations and in other situations. “The outcome of these efforts and the focus it is bringing to our waste management production in general is really something that is awesome.”

The trip will divert more than 99 percent of the trip’s associated waste from the landfill via recycling, composting, and reusing, which requires close coordination with all partners across all aspects of Nat Hab’s operations. Right now, the company is working on identifying proper ways to dispose of or securely store organic waste, eliminating all pre-trip waste, and finding and engaging the right travelers to participate in the experience without compromising the company’s service quality. “This is a big effort across the whole company. We’ve got people working on it in every corner of the company, but because it’s a grassroots effort, that’s part of what makes it so cool,” Martens said.

Ultimately, It’s About the Traveler

Though those working in adventure travel companies are often passionate about mitigating the effects of climate change, Martens emphasized the importance of passing that awareness, education, and action on to travelers. These are the people who can take what they’ve learned and experienced home with them, creating a snowball effect that impacts their behavior as well as those they encounter.

Further, Nat Hab empowers its travelers to share their sustainability suggestions with the company by asking them “What can we do to make this trip more environmentally responsible?” on the post-trip evaluation. “We’ve had this question in our eval for many, many years, and I highly recommend everyone add that question to their post-trip evals. Some of the best ideas we have ever come up with from a sustainability perspective have come from the voices of our travelers,” Martens said.

But don’t wait until travelers have returned home to start that conversation. While watching gazelle speed across the Serengeti, talk about nature preservation. While sipping from reusable water bottles, talk about the devastating effects of single-use plastic bottles. And while swapping stories around the campfire in the evening, explain why your company is committed to reducing its carbon footprint.

“I would argue that the largest, single thing we can do to leave the world a better place is to use those opportunities when our travelers are out there to inspire them to become stewards of our planet that we want to be ourselves,” Martens said. “That ripple effect through our travelers is really where the greatest opportunity comes. For that reason, it is crucial to engage them in these types of sustainability initiatives.”