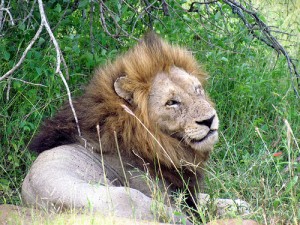 Assistant Editor’s Note: The following article was originally published by the Birmingham Star, and is re-posted here due to the issue’s relevance to the sustainable tourism community. Access the original article here.

Beverly and Dereck Joubert are wildlife explorers with the National Geographic and are based in Botswana in Southern Africa, where they warn a tragedy is unfolding as big cat populations plummet.

Having filmed and photographed nature for thirty years, winning five Emmys in the process, the Jouberts have seen a dangerous reduction in lion populations in the wilds of Southern Africa.

He further points out that the major cause of this rapid decline is the inherently violent relationship between lions and humans, predominantly hunters looking for a trophy carcass and cattle farmers protecting their property.

In a recorded interview, available on TED.com, Beverly Joubert explains why these incidents of human’s killing lions are so detrimental to the wider population. Apart from the fact that a lion is killed and therefore taken out of the breeding population, there are also social consequences within lion prides.

When a male lion is shot by a hunter, for instance, it may lead to the death of as many as 30 lions, Beverly Joubert says, because another male lion will take over the pride of the deceased lion and will often kill all the lion cubs in the process, along with many of the mother’s who will try to defend their young.

For this reason, the Jouberts, in collaboration with National Geographic, have launched the Big Cat Initiative, which aims to enhance global awareness of the crisis unfolding, for it is a crisis and one that cannot be ignored, they say.

“The first thing to appreciate is that the world’s large predators, like lions, are not just a luxury for us to look at, to photograph, or to shoot. They are the most vital center point in many ecosystems,” Dereck wrote on CNN’s Web site, adding that the loss of lions to ecosystems leads to the total collapse of those ecosystems.

Migrations would stop and the movement of prey would be changed, leading to overgrazing and over-population of sensitive environments, which would destroy key vegetation, thereby precipitating a famine in the wild and erosion, which would see entire river systems slit up, killing fish species and birds.

In effect, the loss of lion populations in the wild would reverberate right through the food chain, devastating wildlife populations throughout Southern Africa.

The region’s economy would lose around US $80 billion through the loss of ecotourism, a thriving industry in countries such as South Africa and Botswana. This would lead to the collapse of safari businesses, hotels, airlines and tour operators, leading to vastly increased unemployment which would ripple through the economy, destroying the livelihoods of millions.

The Jouberts are releasing a film in 2011 that chronicles the need to protect lion populations and the consequences we may face if we do not, ‘The Last Lions’. (Picture courtesy National Geographic).