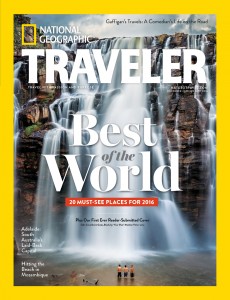 Washington — National Geographic Traveler magazine today announced its annual Best of the World list, which highlights 20 must-see places to visit in 2016, as chosen by the Traveler editors. The magazine’s cover image was photographed by Victor Lima, a Brazilian amateur photographer, who submitted the photo as part of an assignment on Your Shot, National Geographic’s photo community. Lima’s striking image of a waterfall in Goiás, Brazil, was chosen by Traveler editors out of more than 34,000 submissions.

“This year’s Best of the World list truly represents travel’s superlatives,” said Maggie Zackowitz, National Geographic Traveler editor in chief. “Also we are thrilled to be the first major magazine to publish a reader photo as our cover image, especially one shot by an amateur photographer who bought his first camera just a year ago.”

Your Shot regularly asks its members to “go on assignment” with National Geographic by contributing photos around a theme, with the editors picking their favorites. For this assignment, Zackowitz asked Your Shot members to submit photos of their “best place” — the favorite destination to which they’ve traveled — to correspond with the Best of the World magazine feature. The editors’ favorite submissions, along with their comments, may be viewed online at http://yourshot.nationalgeographic.com/stories/best-world/.

Lima’s cover photo and the Best of the World list are featured in the December 2015/January 2016 issue of Traveler magazine, available on newsstands Dec. 1, and online at natgeotravel.com/best-trips-2016.

The destinations featured in the 2016 Best of the World list are (in alphabetical order):

National Geographic Travel is also partnering with Pinterest to invite readers to share where they dream of traveling next. Through Dec. 18, 2015, readers may create boards with the hashtag #NatGeoWanderListContest, pinning images of places they think people should visit in 2016 and submitting the board online at http://travel.nationalgeographic.com/nat-geo-2016-travel-wander-list-pinterest-contest/. Boards will be judged based on theme alignment, creativity and originality, with winners announced in January 2016. Prizes, including a camera, will be awarded to creators of the top three boards.