As evidence mounts for the positive role tourism can play in driving development, the adventure tourism sector, dominated by small businesses working in rural areas and wilderness environments, is gaining attention as an economic development tool with the ability to serve financial and environmental goals.

And although mainstream tourism’s economic benefits are measured in detail — giving the United Nations World Tourism Organization (UNWTO) the ability to publish useful graphics such as the one below, which indicates that globally tourism accounts for 10% of GDP and one in 11 jobs — no such detailed accounting has been compiled for the adventure tourism sector. 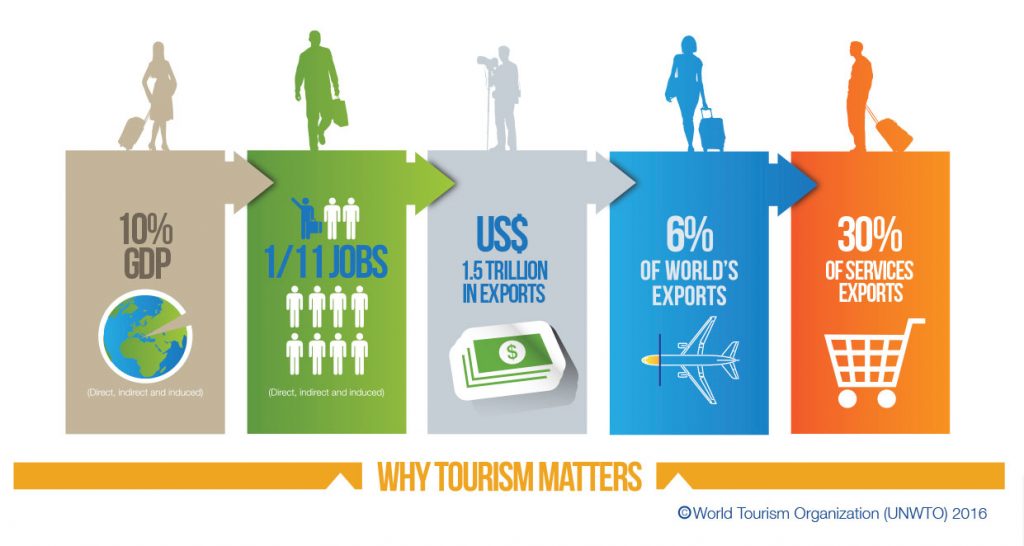 The Adventure Travel Trade Association (ATTA) recently connected with a Jordan-based private sector development team that has identified adventure tourism as an economic sector capable of generating revenue and jobs within local, underserved communities in the country. This team, working on the USAID LENS project, has built a wealth of resources and economic analyses to justify numerous projects aimed at creating new jobs in the adventure travel sector and supporting the development of the adventure tourism industry overall in the country.

The team’s research in Jordan determined that, while mass tourism (e.g. tourism that is not activity-based, typically characterized by demand for large hotels, resorts, and touristic sites with high visitation) comprises the vast majority of tourism expenditures in the economy, its impact on the national and local economies was one-sixth of that of adventure travel. Ultimately, the return on investment for mass tourism in regard to job creation and revenue generation for local businesses was not as high as had been previously assumed. The team’s research concluded Jordan could develop up to 500 new jobs by investing in adventure travel, generating up to $10,000,000 USD annually. The adventure economy promises to be a resilient economic system based on a diversified network of consumers and suppliers.

ATTA has been working with USAID LENS team leaders to explore whether the economic impact model developed in Jordan could be applied in other countries. At the helm of this effort has been Edmund Morris, a consultant for FHI 360 and the USAID LENS project in Jordan. We recently interviewed Morris about the model developed for Jordan and how it has impacted the team’s development work in the country.

ATTA: Tell us briefly how the results of the economic impact model were used in Jordan.

Morris: We initially designed this economic model to support the theory that adventure travel is an excellent means through which local communities can generate revenue, create jobs, and have their environments protected.

The model allowed us to guide the national tourism strategy, making recommendations as to where investment would have the greatest impact, anticipate what that impact would be in terms of jobs and revenue, and predict how the dynamics of a market would react given certain changes or shocks. We were able to examine specific sites, for instance, and look at the extent to which local communities, villages, and towns were benefiting from mass or adventure travel, and understand precisely the number of jobs they were creating and the impact of major investments on local communities from an economic perspective.

ATTA: What would you say has been the biggest learning for politicians interested in workforce capacity building through this work?

Adventure travel is not simply a “new type of tourism” but should be considered as an approach to economic development that has far-reaching economic advantages over its counterparts.

Morris: I think it is safe to say the biggest learning for politicians has been the extent to which adventure travel is fundamentally different from other sectors of tourism. Its economic structures, the modes of investment, the requisites for a functioning adventure industry, and how the service providers, buyers, and suppliers all operate are radically different. Adventure travel is not simply a “new type of tourism” but should be considered as an approach to economic development that has far-reaching economic advantages over its counterparts.

Take investment as an example. Building hotels for a mainstream tourism market requires significant capital, a friendly business and regulatory market, substantial infrastructural changes, and large workforce development programs, and often incurs significant impacts on the environment. It creates economic structures that are highly centralized and focused on economies of scale. Adventure travel, in stark contrast, preserves a natural and human environment (the culture, practices, and traditions) and, as a result, requires no major infrastructural investments, limited capital investment, limited training, and should have only a limited impact on the natural environment.

Having not just politicians, but the private sector, see this was critical for Jordan’s adventure travel industry, which, in the last three years, has taken off, as indicated by the launch of the Jordan Trail, the revitalization of the country’s guiding programs, and an increased demand by customers to do adventurous activities, such as canyoneering. Increasingly, with access to the analysis and data we developed, both the public and private sectors are seeing the significant advantages to the adventure travel industry.

ATTA: What were the biggest challenges to gathering the necessary data to populate the model?

Morris: Each country has different definitions of what a “tourist” is, what they define as a touristic site, or how they calculate tourism expenditures or receipts. Consequently, not all data looks the same, or can be used in the same way. So cleaning data, and understanding the methodologies behind how it has been collected and what it means has been a difficult process.

Fortunately, we have developed substitute approaches and alternate solutions that allow us to overcome many of these challenges. When data sets, such as input/output tables, are not available for a country, it is possible to use data and develop models from countries with similar demographic and economic characteristics. We also use data-scraping off open-source sites or publicly available resources that allow us to quickly extract information that may not otherwise be available.

ATTA: You will be sharing more details about your work and this economic impact model coming up at the Adventure Travel World Summit in Argentina on a panel with the president of Embratur from Brazil. What can people expect from that session?

Morris: I’ll be presenting about why we developed the model, how it works, and what it can mean for countries and adventure travel markets around the world. I promise not to make it too nerdy! It’ll be a high-level overview of the model, focusing on how it can be used to identify and resolve challenges, barriers, and opportunities in adventure travel. I will also talk about some specific examples of how it was used in Jordan and the types of initiatives and new projects it precipitated.

If you are a destination interested in exploring the economic impact in your own country, contact us to learn more.

International tour operators interested in developing business with or tapping into Jordan’s adventure travel opportunities should consider attending AdventureNEXT Near East in Jordan in May of 2018. Many surrounding countries and regions will also be in attendance. Registration is available for local suppliers and destinations.

2 Comments to Modeling the Economic Impact of Adventure Travel: An Interview with Edmund Morris