Assistant Editor’s Note: We are publishing this excerpt from ATTA Member Journey Mexico‘s newsletter, with their permission, to illustrate how some tour operators are dealing with negative press due to local events. 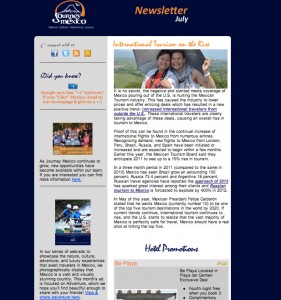 International Tourism on the Rise

It is no secret, the negative and slanted media coverage of Mexico pouring out of the U.S. is hurting the Mexican Tourism industry. This has caused the industry to lower prices and offer enticing deals which has resulted in a new positive trend- increased international travelers from outside the U.S.. These international travelers are clearly taking advantage of these deals, causing an overall rise in tourism to Mexico.

Proof of this can be found in the continual increase of international flights to Mexico from numerous airlines. Recognizing demand, new flights to Mexico from London, Peru, Brazil, Russia, and Spain have been initiated or increased and are expected to begin within a few months. Earlier this year, the Mexican Tourism Board said they anticipate 2011 to see up to a 15% rise in tourism.

In a three month period in 2011 (compared to the same in 2010) Mexico has seen Brazil grow an astounding 100 percent; Russia 73.4 percent and Argentina 18 percent. Russian travel agencies have reported the approach of 2012 has sparked great interest among their clients and Russian tourism to Mexico is forecasted to explode by 400% in 2012.

In May of this year, Mexican President Felipe Calderón stated that he wants Mexico (currently number 10) to be one of the top five tourism destinations in the world by 2020. If current trends continue, international tourism continues to rise, and the U.S. starts to realize that the vast majority of Mexico is perfectly safe for travel, Mexico should have a real shot at hitting the top five.