Assistant Editor’s Note: The following story is a re-print from Nature’s Best, and is published here with full permission from the Swedish Ecotourism Society.

The global growth of recent years has pushed up metal prices, which in turn has led to a Swedish mining boom. But there is a conflict between creating jobs in mining and preserving unique natural environments and traditional employment e.g. reindeer herding. Now that tourism is threatened as well, Nature’s Best organisers are among those leading the protest campaign in the North.

MATTI BERG, ECOTOURISM ORGANISER of the Saami leisure experience company Ofelas Islandshästar & Guideservice, is one of the prominent figures in the protest against Kiruna Iron’s planned iron ore mine in Rakkuri in the northern Kalix river valley, south-west of Kiruna.

“This is where I grew up and this is where we have our tourism business,” says Matti Berg. “We give Swedish and foreign visitors the chance to experience the area’s unique natural and cultural attractions. Now these local jobs are threatened, jobs that can actually be handed down from generation to generation and, typically, it is reindeer herding that will bear the brunt of the blow, because the proposed mine will cut right across the migration routes of the reindeer-herding Sami of the Laevas Sami community.”

In the long run, however, the biggest threat, according to Matti Berg, is that the Rakkuri iron ore mine will become a hub for further exploitation. This is an area that should be included in the buffer zone of the Laponia World Heritage Site, and it is close to the planned Kebnekaise alpine national park.

“Once roads and other infrastructure is in place, the mining companies are sure to demand the right to expand to other exploitable resources nearby. Therefore we must act now to safeguard the rights of the Sami, show that we have credible long-term strategies to preserve these vulnerable Arctic ecosystems and discuss how best to make use of our protected areas. Should our world heritage sites and national parks be surrounded by gigantic open cast mines, or should this be the place where locally based ecotourism flourishes?” asks Matti Berg.

And Matti Berg and the area’s two Sami communities are not alone in their resistance. Last summer, several of Norrbotten’s game fishing organisers also raised their voices in protest, because the mine threatens to pollute the important fishing waters of the Kaitum and Kalix river valleys. These two rivers are of vital importance to the Baltic salmon, and they are also protected under the Swedish Environmental Code. Miners in Kiruna are also opposed, as the planned iron ore mine threatens a vital recreational area, and last spring their union section, Gruvtolvan, added its voice to the protest.

Not even Kiruna’s Social Democrat mayor Kristina Zakrisson is wholly positive towards all the proposed new mines. She believes that new jobs need to be weighed against employment in reindeer herding and tourism.

Further South, west of Jokkmokk, there are also advanced plans for another new iron ore mine. The proposed Kallak mining project is being promoted with the usual promises of more jobs, but the ecotourism companies and dog sled organiser Matti Holmgren are unimpressed.

“Initially the mining company promised at least 500 jobs. Now the talk is about 250 jobs plus about a hundred jobs in related service industries. The question is, how many jobs will there really be in the end, and how many of these jobs will be in Jokkmokk? Thousands of Swedish and European workers already commute vast distances to the mines here in the North. These are people who pay their taxes in other municipalities or work for international mining companies whose profits are banked overseas,” says Matti Holmgren, adding:

“Jokkmokk and the Laponia World Heritage Site are unique places in Europe, and small-scale ecotourism combined with local artisanal crafts and food production is probably a smarter way to use these assets long term.” The number of people employed in tourism in Jokkmokk has doubled in the last 10 years. Today, the industry employs the annual equivalent of 160 people, and many believe this figure can double, and double again. 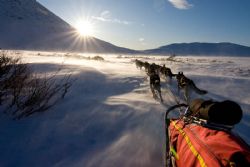 In Jokkmokk as well  the mining companies have their eyes on areas bordering the Laponia World Heritage Site and Sarek National Park. There are several other mineral deposits around the Kallak project, including copper, uranium, nickel and lanthanum, and here, too, the iron ore mine can become the gateway into previously unexploited ancient mountain forests, virgin waters and wetlands. This is a uniquely vast expanse and the largest untamed and unexploited wilderness in the whole of Europe. Not only would this be scarred for many decades by open cast mining, roads and other infrastructure, but huge volumes of mining waste would remain with massive piles of rock and slag leaking sulphuric acid and heavy metals for decades, if not centuries, after the miners are long gone. A couple of years ago, the Swedish Environmental Protection Agency carried out a nationwide survey of worked-out mines in need of reclamation. The bill was estimated at two to three billion Swedish crowns, most of which will have to be met by the Swedish taxpayer.

In the North these new projects are threatening traditional basic industries. The promise of thousands of well-paid jobs for one or two decades from these international mining companies has to be weighed against the growth of tourism and nature’s capacity to attract visitors from all over Sweden.

“Tourism is a new basic industry that has created thousands of jobs over the last ten years. You have to take this into consideration when weighing up the exploitation plans of the mining companies against the unique natural environment, reindeer herding, unpolluted waters, leisure and outdoor activities. More parts of Sweden should be defined as areas of national interest for tourism, where nature and ecotourism are prioritised, along with environmental and cultural protection.

The unique landscape  around Laponia, now threatened by new mines, is definitely such an area,” declares Ulf Lovén, the General Secretary of the Swedish Ecotourism Society, adding:
“Nature and wilderness are Sweden’s greatest tourist attractions. An untouched and unexploited area like Laponia, surrounded by lakes, wetlands and high mountain forests has huge development potential, not only for local small-scale and labour-intensive tourism, but also as an iconic image for the whole of Sweden as an exciting destination for ecotourism. At a conservative estimate, tourism already generates hundreds of thousands of overnights stays and restaurant visits, and supports service industries throughout Sweden. This is an area with huge potential, in which hundreds of new, local, and sustainable jobs could be created in a dynamic and innovative segment of an industry with a promising future,” he concludes.

Recently the Swedish radio programme Kaliber broadcast 3 lengthy items about the Swedish mining boom and its consequences. These programmes provide a detailed picture of the current mining boom, the protests, the jobs market, the winners and losers, and future prospects for the North.