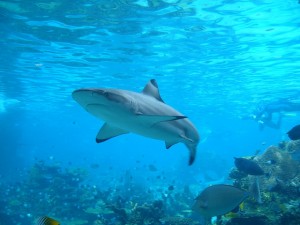 Photo is credited to Allan Lee and listed under Creative Commons.

Researchers in Australia have released a study pricing reef sharks at almost two million U.S. dollars each as tourism attractions, versus food or other products, according to an article in The Sydney Morning Herald.

The researchers found that the annual value to the Palau tourism industry of an individual reef shark at one of the country’s major scuba-diving sites is 179,000 US dollars (121,000 euros) a year, or about 1.9 million US dollars (1.3 million euros) over the animal’s lifetime. Shark diving accounts for about eight percent of the tiny country’s GDP and 14 percent of its business tax base. It also generates more than a million US dollars annually in salaries…

“Shark tourism can be a viable economic engine,” said Matt Rand, a shark expert at the Washington-based Pew Environment Group, which commissioned the research. “This study provides a compelling case that can convince more countries to embrace these animals for their benefit to the ocean and their value to a country’s financial well-being.”

The article also cites that almost one third of open water sharks face extinction, and that their populations’ demise often has disastrous effects on the ocean food chain.

Read more in ‘Million-dollar sharks’ a boon to eco-tourism: report on The Sydney Morning Herald