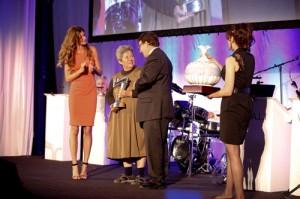 On 18th September 2013 in New York City, distinguished pioneers and leaders in environmental conservation were recognized with the United Nations Environment Programme’s (UNEP) “Champions of the Earth” Award.

Among the list of award-winners, were Janez Potocnik, European Commissioner for the Environment; Carlo Petrini, founder of the Slow Food movement; Izabella Teixeira, Brazil’s Environment Minister and Veerabhadran Ramanathan, Professor at the Scripps Institution of Oceanography, UCSD.

“I’m sure that after this recognition, the strategies and solutions that we are putting into place in the Sierra Gorda will be scaled-up. This award will validate our work and give us presence and visibility on an international scale, so that the participative conservation tools that we have developed can be replicated throughout Mexico”, she said on UN Radio.

Thanks to Ruiz Corzo’s passionate work and a large team of environmental educators, hundreds of families in the Sierra Gorda, including farmers, forest owners, people reforesting, students and micro-entrepreneurs have become part of an environmental movement that really makes conservation possible. Ruiz Corzo has been creating a conservation economy in the Sierra Gorda, making conservation an economic activity for many people in the area, especially for those who receive payments for environmental services. Her vision has developed ecosystem products, such as, carbon offsets to protect biodiversity and combat poverty. It is the eighth time these prestigious accolades have been awarded and they are the UN’s highest recognition of environmental achievement.

“Let me thank UNEP Goodwill Ambassador, committed environmentalist, entrepreneur, and fashion icon Gisele Bundchen for gracing these awards too. Gisele, when we call on you, you are so often there for UNEP when we need you despite your hectic schedule. 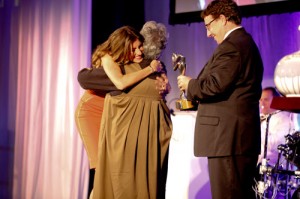 Welcome to the American Natural History Museum-the second time that Champions of the Earth has been held here.

They are made to men and woman who are truly outstanding in their own right and as sometimes part of a wider effort by communities, countries, companies and cities to stand up, be counted and be catalytic in respect to the environment-in respect to a sustainable future.

Our co-winner for the Inspiration and Action category is a woman who, from her native Mexico, has become a beacon for those determined to make sense of nature and the natural environment in the context of the poor and livelihood-generation.

Today, and as a result of summits like Rio+20 and the work of UNEP and its Green Economy initiative-due too to The Economics of Ecosystems and Biodiversity launched via the G8-the world is awakening to the multi-trillion dollar services nature generates, from providing precious fresh water, natural ingredients for medicines, sites for eco-tourism, and countless more services on which economies across the world depend. The world is awakening also to the fact that the GDP of the poor is often dependent on the environment and its natural capital.

Martha Isabel Ruiz Corzo knew that in the 1980s when she began to establish what today is known as the Sierra Gorda Biosphere Reserve. A “payment for ecosystem services” programme has been central to the success of the reserve which was granted protected area status in 1997-the first in Mexico to achieve this via a grassroots initiative.

The initiative assigned an economic value to fresh water, land, and other key natural resources.  Local residents were paid US$30-40 per hectare of land for reducing cattle numbers and not cutting down trees, which improved local watersheds and reduced soil erosion.

Among a range of community schemes, the Biosphere Reserve operates over 100 recycling depots, which manage 900 tons of recyclable materials on an annual basis. The depots are run on a voluntary basis by local women.

But if there is a mother to these nature-based offspring, then who better than ‘Pati’ as she is known to many-a worthy Champion of the Earth and may I say a moving, eloquent and inspirational speaker for those who have had the pleasure to hear her talk”.