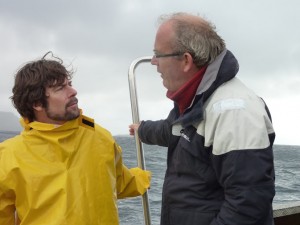 He’s a bit gangly, 50-plus, wears dirty-lensed spectacles and comes across like an absent-minded professor (he forgot his rain jacket and pants on this stormy adventure and had to borrow some gear), yet moves like a youthful rock climber through hundreds of feet of tight-spaced old red sandstone ‘chimneys’. The hovering summit of Skellig Michael, a 6th-8th century, sharply pointed island Christian Monastery, is rather treacherous.

I’m trailing behind, unroped, unclipped and awash in fear, to the pointed 715-foot summit perch above the Atlantic Ocean where only two souls can situate themselves – the ‘safe’ spot where monks for centuries began an even more precarious excursion to the smaller and extremely narrow, 15-foot sharp outcropping where once a small stone cross stood ready for the spiritual kiss of the devout.

Perhaps, I think to myself, this is where a “leap of faith” may have gained momentum.

So too is the water that Michael Gibbons, an Irish Field Archaeologist has metaphorically swum in for decades. 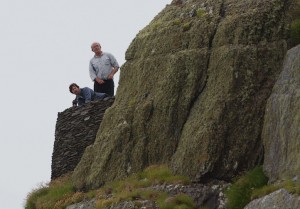 Doyle and Gibbons on the South Peak of the island. Photo: O’Toole.

Or, Michael “Spritely” Gibbons as I aptly named him following our rapid ascent amid the brewing storm with lowering gray-dark skies. A similar cloud has followed Gibbons for years, earning him frequent negative press headlines in newspapers and academic journals for openly resisting conservatism, politics and the sheer lack of common sense forced upon treasured archaeology sites by those ‘in charge’. Instead, he’s held firm throughout the years, calling public attention to the need for global archaeological integrity, but most importantly, in Ireland, where he says practices on Skellig Island have fallen far short, and that those involved, “Should be ashamed.”

According to UNESCO, “The monastery and hermitage on Skellig Michael qualify for inclusion on the World Heritage List on the basis of criteria i, iii, and iv.  They are an outstanding example of a perfectly preserved Early Christian settlement.” 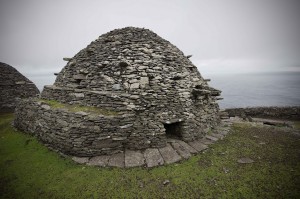 Gibbons knows for scientific fact that significant elements of the Skellig Michael monasteries are not ‘perfectly preserved’. He argues that archaeologists in the 1980s attempted to reconstruct elements of the monastery, but a) failed to fully catalog or scientifically log excavations, losing forever hundreds of years of layered archaeological records, and b) used conjecture and creative interpretations based on modern notions of architecture to recreate, among various structures, the small-sized beehive monasteries.

Not only does Gibbons have early black and white images from previous archaeological surveys to prove that the reconstructions don’t match how the structures originally looked, he’s thoroughly devoured extensive written records from the 1700s which convey an entirely different story. The 1980s archaeologists removed historically significant ruins to ensure that only the earliest remains were left intact, despite Gibbons’ argument that the entire Skellig Island is a dynamic tapestry of monastic life created over hundreds of years. And, he argues, to remove even one element of any given period would be catastrophic to the site’s archaeological integrity. He explains that during the 1980s and 1990s, authorities awarding the site World Heritage designation didn’t require physical proof or inspections of the on-site activity and instead relied primarily on the word of those actually doing the reconstructions. 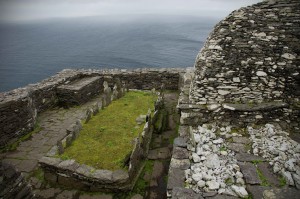 The tombstones on the left of the grass were not originally placed there. On the right, the grave markers are in their original locations. Photo: O’Toole.

To add insult to injury, archaeology students from around the world are now descending on Skellig Island to study the ‘perfectly preserved’ structures that in fact have been drastically and inaccurately reconstructed. He argues that the archaeologists responsible, while certainly had no malice in mind, simply eroded – even  ‘bastardized’ – the integrity of this World Heritage Site to provide tourists with eye-candy at the expense of archaeological integrity.

When I heard this, I simply lowered my shoulders in sheer, personal disappointment. Later, when queried on the boat ride back by a fellow island visitor about what I learned from the otherwise respected field archaeologist Michael Gibbons, I admit it: I lied. I did not want to suck the life out of their recent experience. I just didn’t have the heart to tell them that sizable chunks of what they just saw were re-creations and not the ‘real’ thing.

I’m no academic and I’m loathe to delve deep in the science of archaeology here. But, over the last eight years of my intensive exposure to archaeological wonders worldwide, I’ve become quite cynical. I’m cynical because I cannot seem to trust much of what I’m seeing: What’s original? What’s been reconstructed? Are we altering authentic cultural treasures simply to provide ‘eye candy’ to tourists? What happened to the imagination?

I’m perfectly comfortable seeing a ‘stack of rocks’ that in reality happened may have been a storied 16th century rampart since destroyed by battles, earthquakes and weather, so long as the guide I hire carries me intellectually, accurately and creatively though the history of the ruins. This is where the concept of ‘storytelling’ becomes so incredibly essential to the traveler experience. I fear “Disney-esque” experiences. What I mean by that are reconstructions of historic sites of significance that have been altered to create a vision that meets travelers’ expectations. 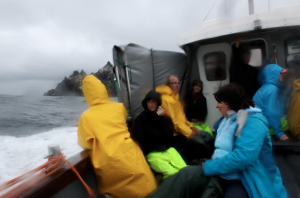 My preferences are to leave sites as they are, to leverage technology to create visuals of how the site might’ve looked – even offering multiple versions that take into account different archaeologists perspectives, to re-create off-site recreations of archaeology sites to give people another way to experience these incredibly fragile marvels of human history. Across Ireland, another site, the 5,000 year old, Stone Age site of New Grange outside of Dublin, remains open to visitors – permanent damage has already been done, and more damage occurs daily, despite the modern model very near by.

So, despite my intense love to see and experience World Heritage and other archaeological wonders worldwide, perhaps its time that we, myself, the tourism trade and travelers alike, consider investing more time and energy in understanding our impact on archaeological sites worldwide. I sense we need to back the academically and scientifically accepted methods of archaeology, expose the realities of travelers’ impacts on these sites, invest in more awareness and education, and be ready to stop visiting certain sites altogether. Better yet, let’s look to preventative measures to lessen our impact on sites and work to avoid the need to alter history for the sake of creating tourist eye-candy.

Meanwhile, I’d like to know what you think. Would you sacrifice a popular tour or archaeological destination to protect such sites?

VIDEO: Michael Gibbons, Archaeologist speaks on the ‘South Peak’ of Skellig Michael. Skellig Michael or Sceilig Mhichíl is an early Christian monastic settlement and UNESCO World Heritage Site on the south west coast of Ireland. Michael is passionate about this island and its past. He asks the hard questions about the Irish State’s past conservation methods of this unique island on the edge of Europe. Recorded 9th July 2012 by Chris Doyle from the Adventure Travel Trade Association (ATTA) and AdventureTravelNews.

Michael Gibbons, a native of Connemara is one of Ireland’s leading field archaeologists, a writer, broadcaster and mountaineer. Michael is a former director of local and national archaeological survey programmes. Other work has involved research on the pilgrimage tradition in Ireland. He spent three seasons as a field director excavating the summit of Croagh Patrick and climbing 2,510 feet to work every morning.

Michael’s knowledge of Ireland’s Highlands has been gained by over twenty years of exploring its multi-faceted landscapes on foot, by boat and from the air. This experience has given him the ability to put together the most interesting walking and cultural itineraries that Ireland has to offer.

Michael’s work has taken him to such diverse places as the Negev Desert, Egyptian Sinai and Southern Greece. He has lectured throughout Ireland, at Oxford and Cambridge, Philadelphia’s National Geographic Society and the Smithsonian Institute in Washington D.C.

He has been the focus of numerous TV and radio programmes on Connemara, the Aran Islands and the Irish Highlands. These includes CNN, Robin Leech’s Gourmet Getaway, SKY TV, RTE, UTV, TnaG, BBC Radio 4, and PBS. He worked as a researcher on the Irish in America series The Long Journey Home. He also presented a series of eight programmes for Irish television on the famine in Ireland. Eamonn de Buitléar, a leading landscape film maker, produced a documentary on Michael entitled Connemara in Antiquity. Recent print articles include Forbes Magazine and the Sunday Telegraph.

3 Comments to Manufacturing ‘Eye-candy’ for Tourists – An Archaeological Catastrophe