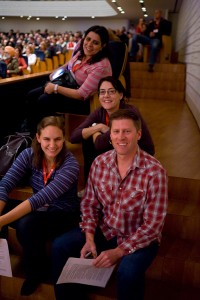 Manal (top) at the 2012 Summit in Switzerland, with Casey Hanisko, Alice Gifford and Shannon Stowell from the ATTA team.

Seattle, WA. –  The Adventure Travel Trade Association (ATTA) announced today that Ms. Manal Kelig, an expert in community development and tourism in the Middle East and Northern Africa, has joined the ATTA global team. Over the last three years the ATTA has created executive director positions in targeted regions across the globe in order to meet the strategic economic, political and consumer needs of the adventure travel industries in those destinations.

Kelig, formerly on the Advisory Board for the ATTA, is one of three co- founders of: Gateway To Egypt (GWE), Travel Marketing in the Middle East and Great Wonders of Egypt a company focused on sustainable travel to Egypt, North Africa and the Middle East.

Mr. Shannon Stowell, president of the ATTA said, “Having Ms. Kelig join our team was a natural extension of our growth; her expertise in the region, knowledge of the challenges, economic and political, facing the Middle East and North Africa, will position us to help nurture and grow a global responsible adventure travel community in a region of the world that has had its challenges but is rich in opportunities.”

Kelig received her B.A. in Egyptology & Tourism in 1992 and then went on to study the public and political role of women in Egypt during the 19th century. That research led her to be involved in various issues of women and the community on the national and international scale. Over the past five years, Kelig has conducted voluntary work with United Nations organizations, earned her PHD degree and pursued more studies in the field of Peace & Conflict studies. Manal is a regular speaker in different events related to the travel industry and History & Politics of the Middle East.

Kelig’s full biography can be read on www.adventuretravel.biz along with fellow executive directors, Chris Doyle of Europe and Antonio Del Rosal of Latin America.