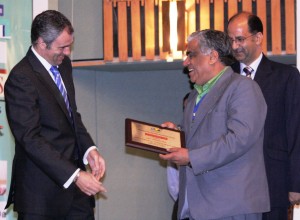 Capt. Swadesh Kumar, Managing Director, Shikhar Travels, received Life Time Achievement Award from Adventure Tour Operators Association at their 9th Annual Convention held in Srinagar, India. He has been honoured for his outstanding contributions in the field of adventure tourism in the country. He received the award from Hon’ble Chief Minister of Jammu & Kashmir Jenab Omar Abdullah during the inauguration ceremony of the Convention on 12th September, 2011.

Capt. Kumar’s interest in Trekking and Climbing Expeditions started in 1969 when he joined the Delhi Mountaineering Association (DMA) as a member. From the very beginning of his career(1974 – 79), he has promoted and pioneered many routes and trails. One striking example of his breaking new ground, is the fact that he was the first person to promote Camel Safaris for foreign tourists in the Thar deserts of Rajasthan.

Though, Capt. Kumar’s achievements are laudatory, he now wants to do ‘more’ for himself, his family, his business, and for what’s closest to his heart – the Indian adventure tourism industry. He wants to ‘contribute’ further and render assistance where it really matters.For this, he started the Shikhar Eco Foundation for cleaning and preserving of the Himalayas.