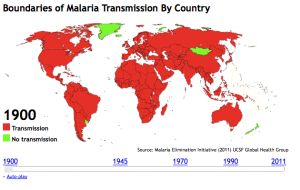 A new global atlas charts prospects for malaria elimination by offering the firstfull-color, detailed depiction of a disease now declining in many parts of the globe. The “Atlas of Malaria-Eliminating Countries” spotlights countries successfully moving toward eliminating the disease and provides a visual tool to help focus resources where they are needed most.

Created by the Global Health Group at the University of California, San Francisco (UCSF), with funding from the ExxonMobil Foundation, and in partnership with the Malaria Atlas Project at the University of Oxford, the new atlas will be released on Oct. 17, 2011, coinciding with the second Bill & Melinda Gates Foundation Malaria Forum in Seattle, “Optimism and Urgency.” A companion publication, the “Atlas of the Asia Pacific Malaria Elimination Network,” is being released on the same day.

Every year, some 225 million people in 99 countries contract malaria and over three quarters of a million people die from the disease – mostly children under five in Sub-Saharan Africa. The World Health Organization estimates that incountries where it is common, malaria can measurably lower the gross domestic product and consume nearly half of all public health expenditures.

“As this atlas demonstrates, many countries are making remarkable strides to progressively shrink the malaria map from the endemic margins of the disease inward,” said Sir Richard Feachem, KBE, FREng, DSc(Med), PhD, Director of the UCSF Global Health Group.

“Thirty-six of the 99 countries that still have malaria are moving rapidly toward elimination,” Feachem said. “We are supporting them in a number of ways to achieve their goal of becoming malaria-free.”

The atlas highlights those countries that have made real progress in eliminating malaria, and illustrates some of the remaining risks and challenges as they pursue their ultimate goal of elimination.

“The atlas will be a useful tool for the global malaria community to better understand the prospects for malaria elimination,” said Suzanne McCarron, President of the ExxonMobil Foundation. “The more we know about malaria, the more we can focus resources where they are needed most.”

Highlighted within the atlas are key factors for malaria elimination, including maps that:

*   Link the risk of malaria transmission with climate data, showing the reach of the two major forms of parasites that cause malaria;
*   Estimate the range of the dominant malaria-carrying mosquito species; and
*   Display locations of human populations at risk of malaria.

Few diseases in history have been as widely spread, poorly understood, and longfought as malaria. The name itself evokes centuries of misunderstanding – a misnomer that comes from an old Italian construction that means “bad air.” People once thought it was caused by swamp gasses, since it seemed to be prevalent in wet, marshy places.

By the dawn of the 20th century, scientists had discovered that the disease is actually caused by microscopic parasites called Plasmodium and spread by mosquitoes. Armed with this knowledge, health officials throughout the lastcentury have worked toward the ultimate goal of eradicating the disease, andhave had great success in progressively eliminating malaria country-by-country.

Full malaria eradication was intensively pursued as a major public health effortafter World War II. As a result, some 109 countries eliminated malaria, interrupting transmission to the point where the disease is no longer locally spread from person to person. The United States, for instance, eliminated the disease in 1952. However, according to the U.S. Centers for Disease Control and Prevention, about 1,500 cases of malaria still occur in the United States each year – imported by visitors or travelers returning from abroad.

Despite successes, eradication efforts stalled in the 1960s, and today malaria remains a major cause of illness in many parts of the world. Almost half the world’s population lives in places where the disease is common, yet significant progress is being made at the fringes of malaria transmission around the world.

“In a time of budget shortfalls,” Feachem said, “this Atlas provides a critical resource for malaria programs and their supporting agencies to more effectively target their elimination strategies and advocate for needed funding to address remaining challenges.”

Bringing further attention to the distribution of malaria across the Asia Pacific region, the “Atlas of the Asia Pacific Malaria Elimination Network” highlights the widespread reach of Plasmodium vivax, the most common and more complicated form of malaria found in the region.

While global attention is heavily focused on P. falciparum – the form of malaria more common in Africa and responsible for a greater percentage of deaths and illness – P. vivax poses a greater risk to the long-term goal of malaria elimination. Currently there are very few effective and safe diagnosis and treatment tools for this form of the parasite. The Asia Pacific atlas focuses attention on this un-met need.

The Malaria Atlas Project (MAP) brings together researchers based around the world with expertise in a wide range of disciplines from epidemiology to mathematics, geography and public health. MAP researchers work together to generate new and innovative methods of mapping malaria risk. Ultimately MAP’s goal is to produce a comprehensive range of maps and estimates that will support effective planning of malaria control at national and international scales. MAP’s research efforts are supported primarily by the Wellcome Trust, UK.

As the first major effort of its kind, the Asia Pacific Malaria Elimination Network (APMEN) was established in 2009 to bring attention and support to the under-appreciated and little-known work of malaria elimination in Asia Pacific, with a particular focus on P. vivax. Major funding for APMEN is provided by the Australian Agency for International Development (AusAID).