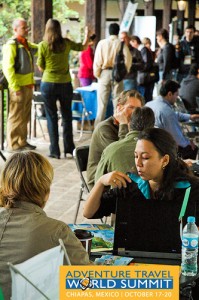 Within the colonial courtyard and garden of the El Carmen Cultural Centre in San Cristóbal de las Casas, Chiapas, Day 2 of the Adventure Travel World Summit saw successful business-to-business meetings in the AFAR Exchange marketplace. Now in its third year as a full day component of the Summit, marketplace forges successful long-term partnerships between tour operators around the globe.

Limited to 100 exhibitors (adventure-focused tour operators and destinations from around the world) and with a heavy emphasis this year on promoting Mexico’s adventure tourism opportunities, the comfortable venue and structured, mostly pre-scheduled meetings allowed outbound operators, wholesalers and specialty agents to learn firsthand about new regions, develop itineraries and check in with current partners. The 2011 AFAR Exchange featured tour and service providers from 40 countries and 12 Mexican states. Buyers participated from a wide range of micro- to large-sized businesses, but like their partners on the ground, uniquely specialize in FIT and group adventures for travelers interested in everything from kayaking to archaeology and bicycling to gastronomy to birding.

Buyer Kathy Stewart said, “The AFAR Exchange in Chiapas was definitely time well spent. The meetings I had were a great opportunity to discuss potential partnerships between Butterfield & Robinson and local tour operators and tourism boards. The gorgeous courtyard and the outdoor coffee area made for the most pleasant meeting venue I’ve ever experienced.”

“The focus in the AFAR Exchange is on high quality interaction versus glossy exhibit space,” explained ATTA Member Advocate Alice Gifford and coordinator for the AFAR Exchange. “By providing a structured venue for one-on-one meetings, compared to the open networking that occurs during the remainder of the Summit…as well as Summit Connections our delegate-only networking website, both suppliers and buyers can come prepared for and benefit from in-depth discussions onsite.” And come prepared they did:  nearly 500 meetings were scheduled prior to arrival, and an unknown quantity of drop-in meetings occurred onsite. 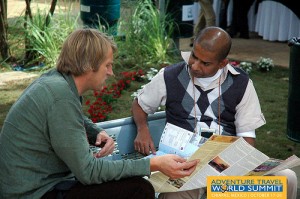 Supplier Hernán Acevedo from Voyage Colombia reported: “Although I didn’t have that many pre-scheduled appointments with buyers during the AFAR Exchange in Chiapas, I had at least ten unexpected visits from operators and media asking about Colombia and our services.  I didn’t expect to receive so much attention, and actually I’m working on three different proposals for operators, and I’m already exchanging e-mails with journalists interested in promoting Colombia.”

Delegates seeking to meet the ATWS Sponsor destinations found the structured meeting time helpful, since they were also featured in marketplace: “As a marketing director, I approach the AFAR Exchange a little differently,” said Tad Bradley of Wildland Adventures. “Of course it’s great for meeting and networking with suppliers. But more importantly for me, it is an opportunity to connect with tourism boards and travel marketing reps, get on their radar as a potential partner in the North American market, and then leverage those relationships for greater marketing and PR support down the road.”

Extended time was also added this year for editorial media to meet with suppliers and destination representatives. The last 90 minutes of the day gave attending journalists, editors, photographers, bloggers, and other delegates the opportunity to find fresh story ideas, interview experts from the field and organize press trips. “The feedback we’ve received about this change to the AFAR Exchange was that the increased time was appreciated, but since meetings were not pre-matched among media and suppliers (and attending journalists have very little time in advance of the Summit to schedule meetings on their own), the late afternoon was not as laser-focused as it could have been,” reports Gifford.

Other constructive feedback included a too-early sellout of supplier tables, scheduling of concurrent sessions during the AFAR Exchange that Suppliers and Buyers were sad to miss, and the need for fresh and more buyer participation in the marketplace overall. ATTA plans to distribute slide presentations and videos from Tuesday’s concurrent sessions to all delegates, and will continue to work diligently to bring in new faces and businesses to the marketplace, while keeping a careful balance between supplier and buyer numbers so as not to devalue the event.

The AFAR Exchange was sponsored again by AFAR Magazine, who opened the day with a short presentation on their multi-platform media brand for experiential travelers who have the desire and the means to immerse themselves in other cultures, to engage with local people, and to enrich their own lives.  They also shared news about the reader/traveler networking site, afar.com and the AFAR Foundation which encourages cross-cultural study and travel by underserved high school students.

Unlike travel shows and exhibitions that include table space in the price of registration, marketplace requires an additional fee for suppliers wishing to secure a meeting table, and is first-come, first-served. Unprecedented interest in 2011 led to a sold out marketplace in April (well in advance of the October Summit date) and a waitlist of suppliers. Plans for marketplace as part of the ATWS in Lucerne, Switzerland (Oct 8-11, 2012) have yet to be announced, and ATTA encourages constructive feedback from attending delegates as it lays plans for next year.