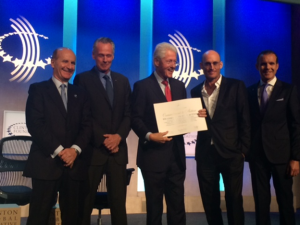 New York, NY – Sven-Olof Lindblad, Founder and President of Lindblad Expeditions, the small ship expedition travel company that voyages the world in alliance with the National Geographic Society, joined fellow members of the board of advisors of Pristine Seas onstage at the Plenary Session of the Clinton Global Initiative (CGI) Annual Meeting this week to be recognized for their commitment by Former President Bill Clinton.

The CGI opening conference also served as the platform for President Bill Clinton to announce National Geographic’s plans to expand Pristine Seas’ commitment to protecting the planet’s most species-rich marine areas, with a goal of convincing governments to officially safeguard more than 770,000 square miles (two million square kilometers) of ocean. To date, the project has generated support for protected areas from government leaders in the United States, Chile, Kiribati, and Costa Rica that cover more than 150,000 square miles (about 400,000 square kilometers).

Lindblad Expeditions made a bold commitment to Pristine Seas – one that will last for the next five years, from 2014-2018. The commitment includes a donation of at least $2.5 million from funds raised aboard their ships National Geographic Explorer and National Geographic Orion to the project, whose goal is to protect at least 10% of the oceans by 2020. Right now, less than 2% of the ocean is fully protected.

“We’re proud to have Lindblad Expeditions as a partner of Pristine Seas; together we will try to inspire country leaders to protect some of the most precious places in the ocean, and develop business models including ecotourism, to provide long-term financial sustainability,” stated Enric Sala, an ocean scientist and National Geographic Explorer-in-Residence, who launched Pristine Seas in 2009.

“On top of these already significant strides for ocean protection, the Obama Administration announced today that it will create the world’s largest marine preserve expanding the Pacific Remote Islands National Monument to nearly 490,000 square miles, approximately three times the size of California.  It’s been a very good week for global commitment to protecting the ocean which we depend so heavily on,” said Sven Lindblad.