Also Marks the Invention of the Category of ‘Expedition Travel’

“I look down at the bottom of the map, unmarked by airline routes. Then I noticed that Antarctica wasn’t even on the map. My enchantment with Antarctica had been so great since childhood that I wondered why I had never thought of it before. I was aware that the idea of setting up tours to that frozen continent would be tangled with complications. Going there might even be impossible. But inspired by koumiss, I boldly announced to everyone, “Our next exploratory tour will be to a place that isn’t even on the map.”
Lars-Eric Lindblad 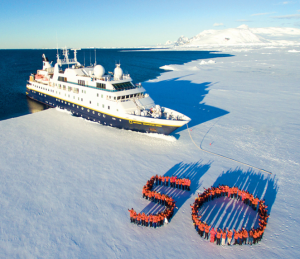 New York, NY – In 1966, Lars-Eric Lindblad made history when he took 57 intrepid travelers on the first ever ‘citizen explorers’ cruise to Antarctica, previously the exclusive province of professional explorers and scientists. January 23rd marks the exact day that these pioneering travelers stepped off the ship and into history at Smith & Melchior Islands on the Antarctic Peninsula. It was certainly an imaginative leap in the tourism industry of his day, and for its time, almost as daring as a lunar launch today.

His conviction earned him the designation of ‘father of eco-tourism.’

Lars-Eric Lindblad invented the category of ‘expedition travel,’ and created a model of exploration that Lindblad Expeditions follows today. Fifty years later, under the direction of Lars-Eric’s son, CEO and Founder Sven Lindblad, they are guided by Lars-Eric’s belief that seeing the planet’s remote wild places with one’s own eyes would make each visitor an advocate for preserving and protecting. And it is his legacy that Lindblad honors and sustains today in their deep commitment to conservation through the Lindblad Expeditions-National Geographic Fund.

Throughout the year Lindblad will celebrate Lars-Eric’s personal vision and courage – and that of the fearless travelers who dared join him in going where no tourist had gone before.