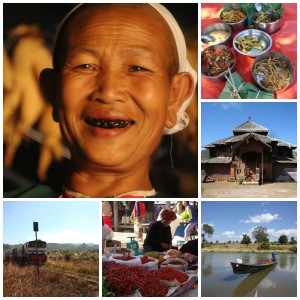 Ahead of ITB Berlin, Khiri Travel Myanmar has introduced two new tours in Myanmar: a 5day/4 night 4WD trip that follows the Jeremy Clarkson Top Gear route through Shan State, plus a 4day/3night trip to the Loikaw hill area of Kayah State, known for its longneck hill tribe communities.

The Eastern Shan State was closed to foreigners until 2013 when Khiri received permission to pass the area with the Top Gear crew. Using a 4WD and driver, the trip starts in Inle Lake and visits Taunggyi, Palaung villages, Phan Lan, Myin Pan, arriving in the Shan state capital Kengtung, in the centre of the Golden Triangle opium trading area. Facilities along the way are basic (forget wifi and 4G) and there is some optional village trekking in and around Kengtung, from where guests can either fly back to Yangon or continue through the hills to Chiang Rai in Thailand.

“Eastern Shan State is certainly one of the last frontiers in Asian travel,” says Edwin Briels, Khiri Myanmar, General Manager. “It’s a trip that will yield fascinating travel stories when you’re at the dining table back home.”

Khiri has also introduced a Loikaw area 4-day trip in Kayah State, with direct insights on the customs and beliefs of tribes, including the longneck women.

In Kasae Kum visitors see how the neck rings are made. A translator tells the story of local customs, spirits and beliefs and the importance of the totem pole, herbal medicines and animist traditions. (Visitors can see the benign effects of a local community based tourism initiative funded by the Dutch government.) There’s plenty of time to chat to local tribes people in their villages. There’s some light trekking between settlements, but mostly the journey is by train and car with some optional bicycling. There’s a budget or a more up-market version of the trip to suit pockets, says Briels.

At ITB Berlin, Briels will also update travel buyers on other new options such as overland trekking from Bagan to Mrauk U over the Chin Mountains (“A real adventure trip that could be excellent for companies with a history of organising treks in the Himalaya or the Andes,” says Briels), or overland (and partly by private boat) from Mandalay to Bagan with an overnight in Yandabo Home, which comprises 12 modern bungalows aesthetically attuned to the local pottery making villages – and proud to offer no WiFi, TV or phone service.