Calgary, Canada – The Caribbean Tourism Organization (CTO) has honoured veteran Canadian travel journalist Theresa Storm with an award for excellence in photography. The award was for the best photograph published in conjunction with a feature article in a Canadian publication in 2010. 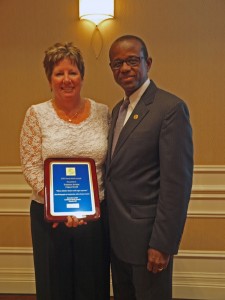 It was the sole photography award announced during the media awards luncheon held December 8th as part of Caribbean Week festivities in Toronto. Storm took the photo in Guyana, South America (part of the CTO), on a fall 2009 trip organized by the Guyana Sustainable Tourism Initiative (GSTI), a joint initiative of the Guyana Tourism Authority and USAID-Guyana Trade and Investment Support (GTIS) program. Judy Karwacki of Small Planet Consulting was acting as the director of tourism for the GSTI at the time and invited Storm to join the group.

At the awards ceremony, Sylma Brown Bramble, the CTO’s director of marketing for the Americas, said, “The winners today were recognized for their contributions to Caribbean storytelling, as their articles evoked and brought to life highlights of the Caribbean to their readers.”  This is the fourth award Storm has received from the CTO. Previous awards include best online article in North America and twice Canadian travel writer of the year. Storm’s other Caribbean honours include excellence in Caribbean travel writing from the Travel Media Association of Canada. 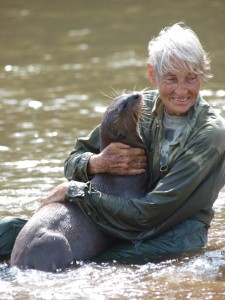 Upon hearing of the award, Eric Kite, USAID Guyana acting mission director, said, “USAID Guyana would like to congratulate Theresa Storm on winning the CTO’s 2011 Caribbean Media Award for Best Photograph in Conjunction with a Feature Article.  We are proud that USAID Guyana’s sponsorship of ecotourism allows skilled journalists like Theresa to introduce the incredible beauty of Guyana to the world.”

Indranauth Haralsingh, director of the GTA, added, “The Guyana Tourism Authority would like to congratulate Ms. Theresa Storm on winning this prestigious award. The photo captures the bond between Diane and otters at Karanambu – a haven for wildlife. Her winning photo will help to showcase and promote Karanambu and Guyana as an untamed wildlife destination.”

Storm also thanks WestJet, Fairmont Hotels & Resorts — The Fairmont Royal York, and the Caribbean Tourism Organization for making it possible to travel to Toronto to accept the award.

To see more photos from this trip, see the online gallery: www.calgaryherald.com/technology/Photo+gallery+Guyana+natural+bounty/3475346/story.html.

For an abbreviated version of the article, see www.delta-optimist.com/technology/Caring+animals+Karanambu/3892257/story.html.