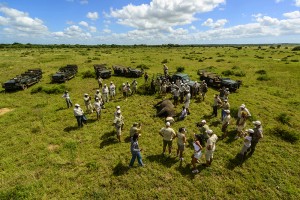 As 2013 quickly draws to an end, it is a time to reflect and celebrate the many successes andBeyond has had this year. Our proudest moment was winning the 2013 Tourism for Tomorrow Conservation Award proving that andBeyond is a world leader in conservation and responsible tourism. The 2013 World Travel Awards also recently named andBeyond the World’s Leading Luxury Safari Company and Africa’s Leading Game Reserve Brand, and five andBeyond properties were named leading lodges in Africa. In most recent news, andBeyond has expanded its portfolio to 33 lodges with the inclusion of andBeyond Benguerra Island in Mozambique.

Please contact us at [email protected] if you have any queries.

With rhino poaching at an all-time high in South Africa, andBeyond safely translocated six highly endangered white rhino from andBeyond Phinda Private Game Reserve to the safe haven of Botswana. As it turns out, one cow was actually pregnant at the time and has now given birth to a healthy calf, which further reinforces the success and value of this remarkable conservation project.
Read more…

With a considerable investment of R230 million (USD 23 million) into our lodges, both andBeyond Kichwa Tembo Tented Camp in Kenya and andBeyond Sandibe Okavango Safari Lodge in Botswana are now being completely rebuilt and redesigned. The brand new looks will be revealed in July 2014.
Read more…

andBeyond encourages family travel and tailormade safaris are designed to suit the needs of guests of all ages. The WILDchild programme aims to inspire children to conserve the planet, learn about different cultures and be inspired by Africa and its wildlife. Not only are little ones kept entertained with new and creative adventures, but parents also earn some time to relax and reconnect.
Read more…

andBeyond has offices in India, Bhutan and Sri Lanka and our knowledgeable travel experts in each country are able to tailormake unique and unforgettable journeys for guests. From vibrant festivals, magnificent landscapes and dense jungles, to ancient monasteries and temples, andBeyond’s destination experts highlight South Asia’s not-to-be-missed experiences.
Read more…

andBeyond CEO, Joss Kent, offers insight into what it really means to be ‘responsible’ about tourism and conservation. Having won numerous conservation and sustainability awards, andBeyond has proven it is a leader in responsible tourism and remains committed to making a meaningful difference.
Read more…