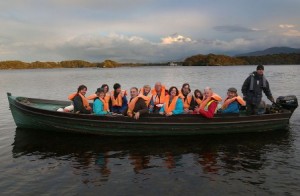 As the Adventure Travel World Summit 2014 (ATWS) ends today, delegates have been fulsome in their praise of Ireland. The high profile event, which has been taking place in Killarney since Monday (6th October), was hosted in Ireland for the first time ever and proved an effective opportunity to sell the country to the most influential players within one of tourism’s fastest growing sectors. Attendees included travel agents, bloggers and media and represented a global ‘who’s who’ in the adventure travel industry.

Many of the 700 international delegates took part in pre-summit “adventures” (tailored tours to showcase the best Ireland can offer) which showcased the variety and attractiveness on offer for the more adventurous outdoors-loving traveller.  Delegates kayaked, climbed and cycled around many of the best outdoors venues in Ireland – with many tweeting and posting images of their travels all around the world.

The timing of the Summit was particularly fortuitous following hot on the heels of the recent launch of the Wild Atlantic Way and many delegates were given a chance to sample Ireland’s newest and biggest attraction.

“No matter how much time I’ve spent in Ireland it’s clear that it’s not enough. The country exceeds every known cliché – the pubs and the rolling hills and the kind-hearted people and the Guinness. But as a landscape for adventure it feels like Ireland is defining a whole new part to its already-rich persona. And with all the hiking, biking, kayaking, and surfing on the Wild Atlantic Way alone, this part of Ireland may be its best-kept secret…at least for now.“

“We’ve travelled to over 80 countries on seven continents and The Wild Atlantic Way has one of the most diverse and strikingly beautiful landscapes we’ve ever witnessed. Combining the beauty of the Irish coast with the warmth and friendliness of the locals makes Ireland one of the top destinations in the world for travellers to visit.”

“We were so impressed by the huge variety and number of activities planned for us. I have travelled to many areas of the world but I have to tell you that I was especially impressed by Ireland’s special part of it. Go raibh maith agat mo chara!”

“The trip and our guides seamlessly brought our diverse group together and shared this country’s proud heritage, myths and history while leading the way in our active exploration of the Emerald Isle.  Thank you for a magical experience I will never forget!”

“The Adventure Travel World Summit in Ireland has been a resounding success and Fáilte Ireland and the Irish tourism sector proved their dedication and commitment to the adventure tourism sector through their incredible efforts in hosting 700 delegates in Killarney. The adventures across Ireland gave delegates an opportunity to experience first-hand not only the adventures Ireland has to offer but also the distinct Irish spirit and hospitality that makes this country so unique.

Our week has been incredibly productive together and the delegates will leave with new partnerships and ideas for innovation while Ireland remains as the biggest winner as the stories of its incredible adventure offerings get added to the bucket lists and tour itineraries of the future.”

The global world adventure travel market is estimated to be worth almost $90 billion [ATN Editor Note: The ATTA’s Adventure Tourism Market Study valued the global industry at $263 billion in 2013.] and in Ireland alone the sector is worth over €850 million.  The profile of the Summit and the activities which took place over the week will greatly strengthen Ireland’s hand as it seeks to grow revenue and jobs in this area.

Shaun Quinn, CEO Fáilte Ireland outlined the value of the sector to Ireland in an interview with RTÉ One’s Six One news on Wednesday 8th October. Click here to watch the interview.

“It was an incredible coup for Ireland to be chosen as a setting for the summit and we are delighted to have made the impact we have over the last few days. Ireland – while long recognised for its friendly people, its heritage and its culture – is increasingly also now being recognised as a destination with the assets that can deliver unique adventure experiences and compelling offers to visitors who love the great outdoors. This week has allowed us to get that message out to a wider audience”

This evening, 9th October, on behalf of Ireland, Mr Quinn will be handing the Adventure Travel Summit baton onto representatives from Chile which is due to host next year’s event.