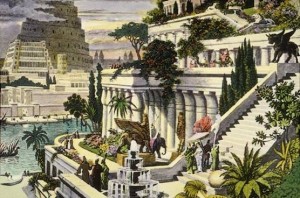 The Hanging Gardens of Babylon, as depicted by the artist Martin Heemskerck. Image: Carla216.

An article on CNN.com (by B. Neild and M. Tawfeeq), as part of a special series titled “Inside the Middle East,” has documented the race to preserve the ruins of Babylon from looters and environmental damage. The government of Iraq and the World Monuments Fund are using the site, previously home to the Hanging Gardens and one of the seven wonders of the ancient world, to help develop skills which can then be used to protect and develop the country’s other major archeological sites, in the hopes these areas will soon be major draws for both academic and mainstream tourism. Despite the ongoing war, Iraq reportedly received 165 tourists between 2009 and 2010 from 16 counties.

“Considering the security situation that Iraq is passing through, this number of foreign visitors gives a very good indicator of how important tourism is in Iraq and how big the tourism industry will be in the near future,” said Tourism and Antiquities Ministry spokesman Abdul Zahra al-Talaqani.

“As an archaeological site, you deal with the authentic remains and try to preserve its integrity. At the same time you’re trying to offer opportunities for economic growth of the local area.”

Other threats to the area include agricultural waste water and village run offs that have a corrosive effect on the site:

“The degradation is at an incredible, alarming rate,” said Allen of the effect of the groundwater on these structures. “We’re going to have to do more investigations and find out who did what, then remove [recent] additions and see what we have.”

Read the entire article, Iraq tourism hangs in balance at Babylon, at CNN.com