Post by Jenny McBain, a freelance writer from Ullapool, who is providing special reports on the daily Summit content. 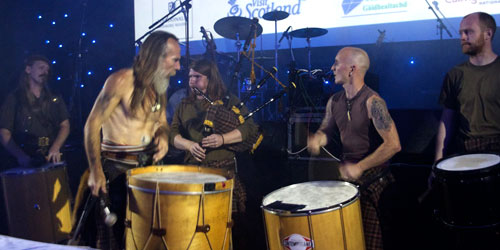 That’s how the front man for band Clanedonia was described by his band mates. Take your mental image of that sort of man, put him in a kilt, strip him from the waist upwards and be liberal with the mud daub.

The music started just before dinner on Scotland night when 2010 Adventure Travel World Summit delegates were piped into the dining room. Then life got exciting. The piper joined a bunch of wild looking and very noisy drummers and we were invited to shout “slainte” at the top of our voices at regular intervals.

Most Gaels are actually rather shy folk who shun the limelight. Plumb the depths and you will unearth great humour and capacity for friendship.

Slainte is what Gaelic speakers and other Scots say in place of cheers. It is pronounced “slange” and literally means health.  Most Gaels are actually rather shy folk who shun the limelight. Plumb the depths and you will unearth great humour and capacity for friendship. One wouldn’t generally discover these Highlanders and Islanders shouting in public — even when they are in their cups.

The author of this article would say Clanadonia are more typical of that rather exotic tribe known as the Glaswegians. Their website does not clarify. Authenticity aside, these guys sure know how to kick off a party. 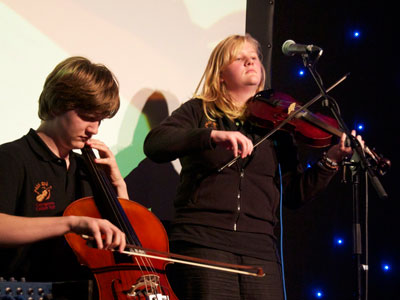 Following up Clanadonia were the traditional duet of Duncan and Catriona Bullivant, one cello and fiddle respectively, in their band named Odsox.

This duet developed their strong interest in traditional music through Feis Spe and progressed to study at the National Centre of Excellence in Traditional Music in Plockton.

With these two bands Scotland proved it knew how to welcome international visitors with a touch of the art that warms the soul.