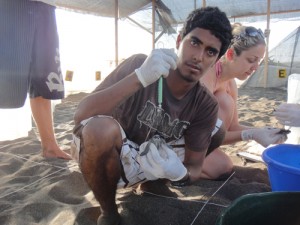 Note from ATTA President Shannon Stowell: The ATTA was saddened to learn of the murder of a sea turtle conservationist in Costa Rica several weeks ago. If you would like to take action, please consider joining the ATTA in donating to a fund that will go toward catching the perpetrators, supporting the conservationist’s family and make a statement to the Costa Rican government that the world is watching to see justice done. Read this story from ATTA Member SEEtheWild, who has been active in providing support in this situation, and find further steps to help here:

A couple of weeks ago, sea turtle conservationist Jairo Mora Sandoval was killed on Moin Beach, near the port city of Limon on Costa Rica’s Caribbean coast. This beach was known for its poaching and use for transporting drugs and the death is believed to be related to the drug trade. We at SEEtheWILD are heartbroken by this tragedy and are working with our partners to respond to make sure the country’s turtle beaches are safe for turtles, conservationists, and volunteers.

How to Learn More & Help: