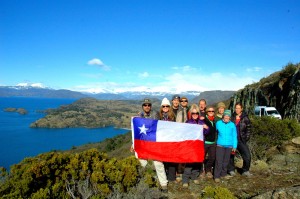 A group of eighteen traveled across Chile, from September 1st to the 11th, sampling three regions in the southern portion of the country: Los Lagos (Lakes), Magallanes and Aysen. Antonio Del Rosal, Executive Director of Latin America, who accompanied the group, said, “The ATTA’s primary goal in partnering with destinations for AdventureWeek is to facilitate the sustainable development of adventure travel product offerings that meet the needs of international travelers.” He continued, “Secondly, it is important to create brand exposure for destinations like Chile that want to showcase lesser known adventure highlights in their country or regions that aren’t normally considered during tour planning.”

Activities during AdventureWeek Chile included horseback riding, snowshoeing, mountain biking the cone of Osorno Volcano at Vicente Perez Rosalez, riding a jet boat on Petrohue River, trekking the Northern ice fields, and kayaking through General Carrera Lake, the Magellan Strait, and the coastal Andes. Local food and wines were plentiful along the way adding a cultural element to the AdventureWeek Chile experience.

Media associated with Backpacker, AFAR, Travel Weekly and various online outlets accompanied the group as well as a storytelling team who documented #FeelingChile along the way.

“This adventure week has been a great opportunity for Chile; we have been able to have been able to show, in-person, what our country and these three regions have to offer,” said Rudyard Ullrich Zulic of Turismo Chile. “It has been a great experience for local tour operators and for our international visitors, and next we want to develop another Adventure Week for 2014, highlighting the regions of Metropolitana ( Santiago area) and possibly the Atacama region.”

During each tailored nine-day AdventureWeek program, outbound tour operators, specialized travel agents and international travel media meet with local operators and ground suppliers in a dedicated marketplace in each destination. ATTA is currently working with several regions around the globe on an AdventureWeek for their regions for 2014 and 2015.