Written By: Nicole Petrak
Editor’s Note: In the past two years, ATTA Member Amit Sankhala, of Encounters Asia / Jungle Lodges and who’s grandfather helped establish tiger reserves in India in 1973 and who himself is a leader of http://www.tigernation.org, has kept the ATTA apprised about the tiger situation in India. So, when this news surfaced from CNN and also from Times of India, AdventureTravelNews.com asked for Amit’s on-the-ground take of the situation. Here was his reply: 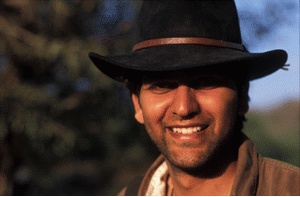 As majority of you have already been reading the online articles regarding the ban on Tiger Tourism, I thought I would give a better explanation of what is happening.

Wildlife Tourism really started in India in the 1980s. We were one of the first to set up lodges and have been in the industry for almost 30 years now. During the 1990s, wildlife tourism – especially in places like Bandhavgarh and Kanha -was reserved primarily for people who had a genuine interest in wildlife viewing rather than just a holiday or picnic. This was primarily because poor infrastructure made it challenging to reach these remote areas.

During the turn of this century, infrastructure has improved, roads got better, flights only six to seven hours away  became available and the national parks became a much more organized tourism hub. India started booming and this brought in many new investors to set up lodges and hotels. In the last 10-12 years, hotels started mushrooming everywhere. Sixty to seventy percent of these new developments didn’t really respect the environment built double or triple story buildings -some illegally on forest or tribal land. There were no proper methods of waste disposal or energy conservation. 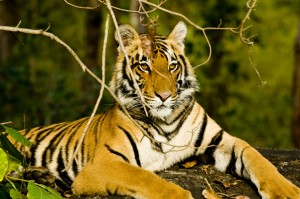 With the growth in accommodations, the number of tourists grew. Indian tourists also became an integral part of this business and constituted to over 70% of  park entrances. The forest department, realizing this growth, increased their entrance charges by about 2000% in some cases, over a period of 5 years. This happened primarily talking in Madhya Pradesh, constituting Bandhavgarh, Kanha, Pench, Panna and Satpura areas. More and more locals started investing in Jeeps and started driving rashly in the parks. Two years ago, MP started regulating this by restricting the number of vehicles that entered each gate and providing a route system to each and every vehicle in order to maintain order. But flocks of jeeps still crowded any particular spots where a tiger was seen.

Journalists got a hold of many of pictures of overcrowded Jeeps and started publishing them regularly, developing an anti-tourism lobby. Additionally, concrete construction projects without any guidelines occurred near every national park which just put more and more pressure on the ecosystem. Some of these even destroyed tiger corridors in some cases.
Yet we all know one thing – wherever there was tourism, tiger numbers have grown. Yes, disturbed for those hours where 20 jeeps fought for a good spot for their clients to have the best picture, but ALIVE. The forest department has never had the right resources to protect its tigers. Funding has always been limited, and the guards ill-trained. When we held guard training workshops in some of the parks, it was shocking to know that they didn’t even know their basic rights when arresting a poacher. Our parks may not be as big as Africa, but they still constitute a large area. Over a 1000 sq. km. in Bandhavgarh and around 2000 sq. km. in Kanha. Whenever a census was done, the majority of the tigers were found in the tourism zone. We still strongly believe that more eyes on the tigers are protecting the tiger communities today.The Supreme Court Case – About a year ago, an NGO based in the Madhya Pradesh capital of Bhopal, filed a Public Interest Litigation (PIL). National Tiger Conservation Authority (NTCA) has wanted to make the core area of all national parks inviolate (free from human intervention). In some national parks, the core and the buffer have been demarcated, but in some cases it still has not taken place. This NGO, although has no relation to tiger conservation, filed the PIL to investigate why the NTCA guidlines have not been followed. This case is still pending in the high court of Madhya Pradesh but somehow reached the Supreme Court, where it became a country wide battle. To be honest, the lawyers arguing for the state and other interveners were simply not prepared in the last hearing.
The judge decided to shut down core areas of all tiger parks in India until the guidelines of NTCA are reviewed. This was an unexpected move but since majority of national parks are closed till October, it has not impacted anyone yet. Although in some states like Karnataka, where national parks like Nagarhole and Bandipur are open even in July, have been directly hit. BUT, for everyone the negative publicity in the media has impacted us all. We all need to realize that the court order is an interim order, for which is still pending a final decision which would become law. They are waiting for these ecotourism guidelines to be reviewed, which are up for debate on the 22nd of August. States like Madhya Pradesh will hire the best lawyers to fight this case. Just to give you an idea of the interveners – the guide association of MP, Gram Sabha for the tribal community, Kanha Lodge Association, a 10 year old boy for his right to see his natural heritage, etc. Many more will probably be filed now, because its become an nationwide battle.
If all the parks were shut, or for that matter, tourism was ONLY allowed in the buffer zone:
The Supreme Court  proposes that they need ecotourism guidelines. We ALL want this – or at least the individuals that care –  but not at in unreasonable manner. Where were the guidelines when tourism started flourishing 10 years ago? When businessmen added concrete to our jungles, without any rules or regulations, bribing local officials throughout their every move, by building on tribal land – where were they? 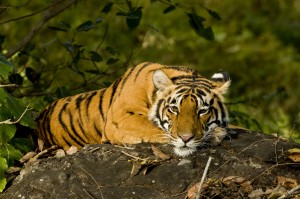 The guidelines are good overall but there are some points we need to argue. The rules cannot be entirely decided  by two people sitting in an office. We feel a committee should be made with all stakeholders involved from the village head to the Forest Minister. This is what we are fighting for. The guidelines allow tourism in the Core area upto 20 percent, but their calculation of how many jeeps are allowed acceptable to all.

We are preparing for this case on the 22nd in many different ways:
We have seen it since its birth. We have monitored every tiger, its cubs, and their cubs. We know their names, we know their behaviour. Are we not keeping an eye? This is the question we ask the court.
We are hopeful of a reasonable judgment. We have full faith in the legal system, and we will be prepared with the best arguments. Tourism can be a tool for conservation, and we know it. We want the courts to realize this too.Again this is not an indefinite ban, but a move to bring some regulation in the system. The common message is – ‘save the tiger’.A good article – http://www.indianexpress.com/news/tiger-myths/979398/0
Conservationists whose articles and names to look out for – Belinda Wright, Valmik Thapar, Dr.Raghu Chundawat.
Views from all sides are given in the media. Some negative, but many positive. Refer clients to those articles if needed. If you want to be kept in the loop through us, we can happily send you links as the articles keep getting published. Otherwise I am sure everyday if you put Tiger Tourism in google, new articles will pop up.
Wildest Regards,
Amit Sankhala
Managing Director
Dynamic Tours / Encounters Asia
Jungle Lodges (Tiger Resorts Pvt. Ltd)
Tel : 0091-11-26853760, 26858656
Fax: 0091-11-26865212
Website: www.encountersasia.com
www.adventure-india.com
www.kanhajunglelodge.com
www.bandhavgarhjunglelodge.com
Biography: Born as grandson of a Forest Officer and a son of renowned wildlife tour operator, Amit has rambled in the remote forests since he was a month old.

Shri Kailash Sankhala (Amit’s grandfather) were a celebrated personality in the field of wildlife. He was a distinguished forest officer with the Indian Forest Service and Founder Director of Project Tiger, launched in 1973, acclaimed as the most successful conservation program at that time.

Having inspired by his father and grandfather, Amit Sankhala has vowed to continue the legacy of the Sankhala family by carrying forward the mission of nature conservation and wildlife tourism. Managing Director of Dynamic Tours Pvt Ltd. Tiger Resorts Pvt. Ltd, and trustee of Tiger Trust, Amit has vast knowledge and boundless enthusiasm in the Tourism meadow has enabled him to get series of success in his profession. Having traveled throughout the world, from tracking Jaguars in the Pantanal to Polar Bears in Svalbard, Mountain Gorillas in Uganda to snorkeling in the Galapagos Archipelago, Amit has done it all.