The International Galapagos Tour Operators Association (IGTOA) is committing $25,000 in emergency funding to the Charles Darwin Foundation (CDF) to study different methods for combating Philornis downsi, an invasive species of fly that is devastating populations of terrestrial bird species in the Galapagos Islands. 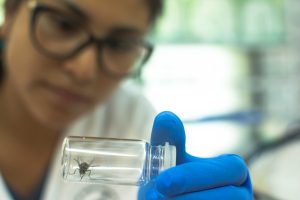 Philornis downsi lays its larvae in the nests of birds and the larvae feed on the blood of the birds’ nestlings, often killing them. One species, the Mangrove Finch, which is on the brink of extinction with fewer than 100 individuals, is a target of this invasive and highly damaging fly. Other threatened bird species, including the Little Vermilion Flycatcher, the Large Tree-finch, the Medium Tree-finch, and the Warbler Finch, also face uncertain futures due to the ravages of P. downsi.

IGTOA’s funds will be used by the CDF, in conjunction with the Galapagos National Park and other scientific institutions around the world, to investigate different strategies for controlling and possibly even eliminating P. downsi from the islands all together. In particular, they will be used to develop methods for breeding the fly in large numbers in the lab in order to provide a continuous supply of flies for research and to evaluate the potential for using a specific eradication strategy called the Sterile Insect Technique (SIT) – where large numbers of laboratory-raised, sterile males are released into the field to mate with wild females, resulting in the production of infertile eggs.

IGTOA funds will also be used to support research being done by CDF with scientists from the State University of New York, College of Environmental Science and Forestry to study olfactory cues used by the flies as they search for food, mates and nestlings. So far, studies have identified attractant odors from adult birds, bird eggs and fermenting fruit. These attractants can potentially be used as lures in fly trapping programs that would be deployed in the nesting areas of endangered bird species.

According to Arturo Izurietta, the Executive Director of the Charles Darwin Foundation, “Invasive species pose one of the greatest risks to the remarkable endemic wildlife of the Galapagos Islands and Philornis downsi is one of the most destructive invaders. Thanks to IGTOA’s generous gift, we may soon be one step closer to eliminating this menace from the islands once and for all.”

“IGTOA and its member companies are motivated by the sincere belief that the tourism industry has an obligation to be a part of the conservation solution in the Galapagos Islands. Philornis downsi is one of the most serious threats the islands face today and we are proud to support the groundbreaking efforts of the CDF to control and eliminate it once and for all,” said IGTOA’s Executive Director Matt Kareus.

Located 600 miles off the coast of Ecuador, the Galapagos Islands are one of the world’s most pristine oceanic archipelagos and home to hundreds of species found nowhere else on Earth. Designated as one of the world’s first 12 World Heritage Sites in 1978, today the Galapagos archipelago is considered one of the world’s foremost tourist destinations for natural history and wildlife. The islands’ unique biodiversity, famously inspiring Darwin’s theory of evolution by natural selection, face a variety of threats, including invasive species, illegal fishing and poaching, and the impacts of population growth and development. The mission of the Charles Darwin Foundation and its Research Station is to provide knowledge and assistance through scientific research and complementary action to ensure the conservation of the environment and biodiversity in the Galapagos Archipelago.