At this very moment Greenland is hosting Vestnorden Travel Mart 2017, the travel trade conference for Faroe Islands, Greenland and Iceland – and it should be one to remember. 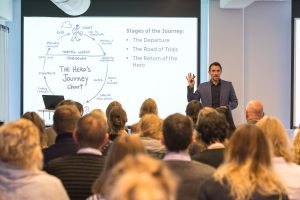 The travel trade show is being held in Nuuk, Greenland from 18 – 21 September. Since it is only hosted by Greenland once every four years, VNTM is a trade show of significance for the stakeholders of Greenlandic tourism. This year, the organisers planned for the event to be highly focused on networking and development through shared adventures.

Some of the newest elements of Vestnorden Travel Mart were modelled after the Adventure Travel World Summit, which Visit Greenland has participated in for nearly a decade. For the first time ever, there was a Colourful Nuuk Adventure element, inspired by the Day of Adventure at ATWS. There were over 20 Colourful Nuuk Adventures to choose from, and they ran the gamut from sailing to remote huts in the fjord to making a piece of the traditional national costume to touring museums. It was up to the delegate to choose the adventure that best suited their personal interests. The goal being for local and international tour operators to network in a relaxed setting, creating opportunities for building natural relationships.

Another first for the travel conference, modelled after ATWS, were Sessions. Acting Director Lykke Yakaboylu says, “When planning VNTM17, we were looking for a way to be more relevant for our delegates. So we decided to cut out some of the business meeting times and schedule Sessions and Colourful Nuuk Adventures instead. We wanted our tourism stakeholders to discuss pertinent topics across the West Nordic region and share insights, something which is done very well at ATWS.” 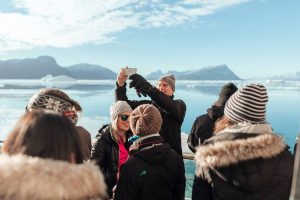 Last but not least, last week Greenland’s tourism stakeholders simultaneously hosted a record number of five Vestnorden Travel Mart pre-tours across the country, which emulated the pre-summit adventures during ATWS. Pre-tours have been a staple of VNTM for many years and are organised by the host country, however, there were never such high ambitions for pre-tours previously. A total of 50 hand-picked international tourism professionals and 3 international press visited a specific region in Greenland. There were 10 to 15 guests on each pre-tour to North Greenland, South Greenland, East Greenland, Arctic Circle and an Air Greenland Arctic Highlights tour which covered Nuuk, Kangerlussuaq and Ilulissat. This was possibly the most complicated logistical operation tried in the history of Vestnorden Travel Mart not to mention Greenland travel trade tourism. Each region’s public and private actors had to plan and coordinate a tour up to 5 days in length with Visit Greenland. Air Greenland was the main player in sponsoring flights, while Air Iceland Connect was behind sponsorship for the East Greenland pre-tour.