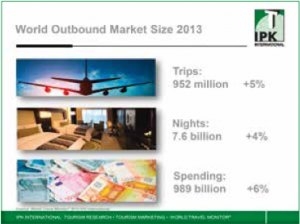 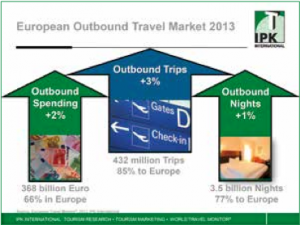 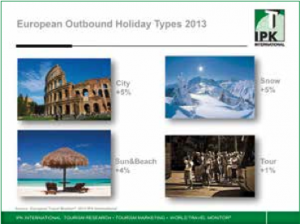 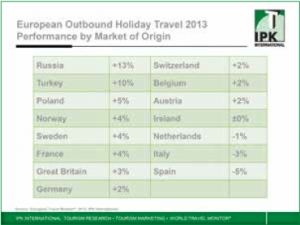 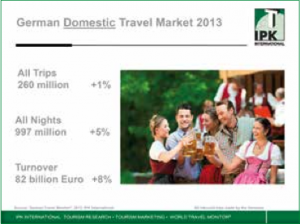 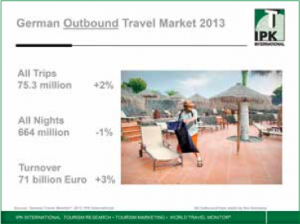 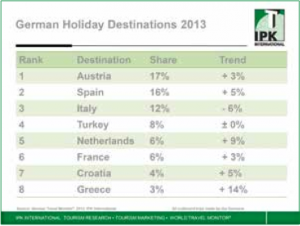 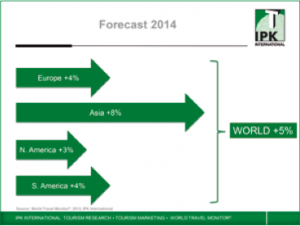 Berlin – Spirits were upbeat in most global tourism destinations in 2013. Great numbers of new jobs were created and figures on pending tourism investments are high. Hence, again in 2013, tourism has proven to be one of the main growth drivers in an otherwise somewhat languishing world economy.

Unfortunately, some destinations were unable to escape internal violence, political unrest and natural catastrophes. Conflicts continued to play out in Egypt; after a brief recovery, sales figures plunged again last fall. In Syria, the tourism industry has collapsed completely. Political unrest is surfacing in Thailand and Turkey, although not yet resulting in negative sales figures. Greece, although still unsettled, revived in 2013 and now sparkles in the glow of a double-digit tourism increase.

An ambivalent pattern is also seen for the countries of origin of international tourism. Despite ongoing national and bank debt crises, the economic situation has noticeably improved in the “advanced economies.” With few exceptions, their national products are improving again, even if only very tentatively. The “emerging economies” have once again “outperformed” in 2013. Yet such booms are not universal. On the whole, “emerging market” growth decreased from 5.6% to 4.6%. As a result, the gap between the “advanced” dynamics and those in the “emerging markets” shrunk somewhat in 2013.

All told, IPK’s World Travel Monitor® recorded a +5% increase in outbound travel to 952 million for the 2013 international travel year. The number of foreign overnight accommodations increased by 4% (7.6 billion nights) and, at 989 billion Euro, international travel spending even rose +6%.

“Despite the sometimes very different developments in both the destina- tion countries as well as the countries of origin, all aspects of outbound travel – number of trips, overnight accommodations and spending – reached new record highs in 2013. Thus, yet again in 2013, tourism has proven to be a growth driver in the global economy,” notes Rolf Freitag, CEO of IPK International.

2014 will see a subsiding of the current ambivalence between the advan- ced and the emerging economies. Travel from the advanced economies will grow somewhat more strongly than in the previous year while the travel boom from the developing countries could slacken to some degree. Rolf Freitag adds: “We’re anticipating 8% growth in the outbound travel demand for the ‘New Economy’ countries of Asia. For Europe, we’re estimating 4% growth and for North America, 3% growth.”

Further findings from IPK International’s World Travel Monitor® on the outbound travel of the Europeans and Germans in 2013:

In terms of the types of holidays the Europeans took during the past year, beach holidays were the most frequent, chalking up +4% growth. In contrast, the number of tours only rose by 1% but, conversely, stronger growth (+5%) was noted for city trips and winter holidays.

As IPK’s World Travel Monitor® figures show, there were both highs and lows across Europe’s most important source markets in 2013. Russia again dominated the European growth figures with an increase of 13%. Outbound trips from Turkey also rose sharply (10%). Even Europe’s highest-volume source markets such as France (+4%), Great Britain (+3%) and Germany (+2%) realized gains last year. In contrast, the so-called Euro-crisis countries including Spain (-5%) and Italy (-3%) evidenced clearly negative outbound travel balances.

Based on the World Travel Monitor® results for the past year, continued positive development is expected for the German market as a whole (domestic and out- bound travel). The Germans took 335 million domestic and outbound trips in 2013 (+2%), and at 1.7 billion, the number of overnight stays also came in 2% higher. Important to the tourism sector: the number of German holiday trips rose 3%, now accounting for 46% of the entire travel market. Business travel also recor- ded positive development (+4%), while private trips reversed somewhat last year (-1%). With a 6% spike to 153 billion Euro, the growth rate of the Germans total travel expenditures exceeded that of travel volume and accommodation.

For the first time in years there was a trend seen toward outbound travel in the form of a 2% increase (to 75.3 million trips), whereas domestic travel only rose 1% (to 260 million trips).

The same holds true for the holiday trips of the Germans: Domestic holi- days increased 3% (to 98.6 million) whereas at 54.8 million, German outbound holidays rose even more sharply (+4%). “This is the first time in many years we’ve seen a German trend toward more outbound trips and fewer trips taken here at home,” says IPK head Rolf Freitag.

There was still no change with respect to the top holiday destinations of the Germans: Austria continued to hold first place in 2013 (17% market share), followed by Spain (16%) and Italy (12%). Austria and Spain were able to hold onto their market shares with single-digit growth rates while Italy’s negative growth resulted in the country losing 1% market share. Other popular German outbound holiday destinations last year were Turkey (8%), the Netherlands (6%) and France (6%). Greece showed recovery with a double-digit growth rate. Meanwhile, with 20 million holiday trips, Bavaria still remains the undisputed market leader in domestic destinations. Bavaria is twice as popular as the second and third ranking states of Lower Saxony and Baden-Württemberg.

Although the global economy seems to be heading toward recession, IPK anticipates a 5% worldwide growth in tourism for 2014.

In the emerging markets of Asia, tourism demand will increase by 8%, in the South American markets by 4%. But also the traditional European and North American travel markets are once again in a growth phase with rates of approximately 4% for Europe and 3% for North America.

Social media will continue to gain more and more relevance, including for the tourism sector. Nearly every second European outbound traveler is part of the social media community and 16% of them already use social media as a source of information for planning and realizing their trips.