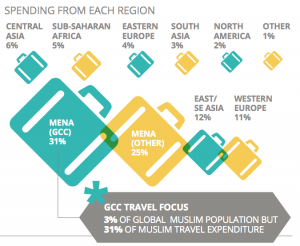 Muslim-friendly tourism, Halal tourism and spiritual Tourism are all names for a young, fast-growing niche market that belongs to the growing educated middle class in the global Muslim community. This group is fully engaged with the world, proud of their identity and keen to define their own place in the world. They are technology-savvy, innovation-loving and, most importantly, seek to be well traveled. The traditional Muslim travel market used to be largely limited to religious trips to Saudi Arabia; in the last 50 years, this has shifted into a more modern-day market which includes family holidays, company trips, honeymoons, a younger, back-packing demographic and touristic ventures.

Since then, most of outbound Muslim travel has centered on North America and Europe, where their needs have been greatly over-simplified and they’ve been tasked with finding ways to handle those needs without much understanding or support from local businesses and operators.

After the events of 9/11, Muslim travel shifted drastically yet again due to many socio-political constraints and concerns. They increasingly limited their travel to destinations that have a high level of tolerance for Muslims, as both real and perceived safety became a high priority. A few Asian destinations – namely Malaysia, Dubai and Turkey – were able to benefit from this situation, and they began for the first time to offer Muslim travelers accommodations, facilities and trips that spoke openly to their needs.  For a few years the emerging Muslim-friendly travel market was totally unnoticed by larger global travel markets but now as Muslim consumers across the world grow stronger in asserting and articulating their unique needs, more destinations realized that this is a major growing market rich for potential for those who pay attention and respond.

Reuters’ has released a recent report called State of the Global Islamic Economy Report 2013, it names outbound Muslim tourist spending at $137 billion in 2012, which places it at a solid 12.5 percent of global tourism spending. The top three spending markets from Muslim majority countries are Iran, Saudi Arabia and the United Arab Emirates, while Muslims from Russia, Germany and France take the top outbound spending demographics for countries where Muslim residents are a minority.

The Muslim friendly market of travel encompasses a plethora of genres that accommodate travelers who would value amenities such as halal food, conservative and family-friendly travel environments, prayer/ ablution facilities, religious travel services and more.

A key question that adds to the complexity of the market is how can destinations cater to the needs of Muslim travelers as part of their national tourism strategy and development plan in a manner that would not contradict with other types of tourism they are offering? Take a lead from Singapore, where consulting firm Crescentrating hopes to attract the rising Halal-friendly demographic with a new website, HalalTrip.com, which has a range of features such as city itineraries and halal restaurant guides for tourists wishing to travel in accordance with the rules of Islam. “It is the world’s first fully-featured travel booking website for Muslim travelers,” said CEO Fazal Bahardeen.

Working on solutions for these open questions gives industry players a unique opportunity to lead in adding this segment to their multi- cultural marketing mix.