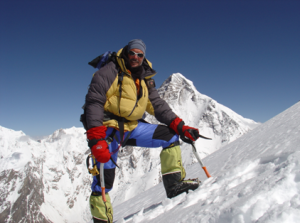 A window in the weather appeared at which time Global Rescue launched a helicopter equipped with a hoist that can evacuate climbers from locations with no landing zone. Unfortunately, the weather deteriorated and the helicopter was forced to turn back.

Warner and his team were able to descend to base camp on foot over the next 24 hours, where Global Rescue was able to evacuate him via helicopter to a medical center in Kathmandu. After a battery of tests, HAPE was ruled out, although Warner was diagnosed with pneumonia. He has since been released and is making a quick recovery.