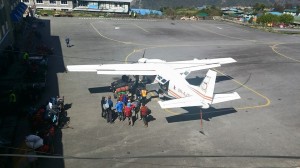 Boston, MA – In the aftermath of Nepal’s earthquake which left thousands dead and hundreds of climbers stranded on Everest, Global Rescue has successfully extracted members of the final group of 18 climbers from Camp 1 and Camp 2 this morning. Global Rescue coordinated the evacuations with its contracted air providers in the Himalaya. Global Rescue is a worldwide provider of integrated medical, security, intelligence, travel risk management and crisis response services to enterprises, governments and individuals.

Global Rescue member Patrick McKnight wrote in his account of his rescue from Camp 1: “Global Rescue saved the day — they were the only ones with a heli up there & they got everyone down.”

Rescue operations conducted by Global Rescue personnel in Nepal include:

More than 4,300 people have been killed and more than 8,000 others injured following a magnitude 7.8 earthquake, the worst in nearly a century, that struck near the capital, Kathmandu, and the second-largest city, Pokhara, on April 25. Local media have indicated at least 900 fatalities in Kathmandu alone.

Global Rescue has deployed additional personnel to join its teams already stationed in Nepal. The company continues to communicate with and provide support and advice to clients and members in the region and is actively coordinating air resources for rescue and evacuation missions.

“Our immediate priority following the quake was to ensure all of our clients were uninjured and to get everyone off of the mountain to base camp. We’ve accomplished that,” said Global Rescue CEO Dan Richards. “We face significant challenges with food and potable water in short supply in the area, and weather impacting both rotary and fixed wing flights throughout Nepal. Our teams are working around the clock under quite challenging conditions and accomplishing extraordinary things.”

Global Rescue has performed rescue and evacuation missions in Nepal every season for more than a decade, typically conducting dozens of helicopter evacuations in the Himalaya each year. Global Rescue deploys medical and security teams, including former military special operations personnel, critical care paramedics and physicians, around the world to personally respond to members facing emergencies.