A key premise that the ISO (International Organization for Standardization) WG 07 adventure tourism standards delegation, which met May 16-20, 2011 in both Podernovo and Narni in the Umbria region of Italy, agreed upon is that adventure tourism is growing and is expected to continue on a rather significant climb.

Fortress-top view of The Abbey of San Cassiano in Narni, Umbria, Italy (in distance), during an afternoon break of the ISO WG 07 gathering.

That perspective accentuated why many adventure tourism boards and service providers are more aggressively pursuing sector development – and, why they’re investing in establishing legacy standards. Quality standards, which when adhered to, they’re banking on, will help differentiate their offerings and increasingly attract international visitors. A case-in-point is New Zealand, which according to its sole national delegate at the ISO Standards meeting, will begin auditing 100 percent of adventure tourism service providers. Meanwhile, its Prime Minister is telling his people to fully develop and support the adventure tourism sector. And, New Zealand’s Prime Minister and others investing in standards, are likely on the right track.

Getting Started & The Background

Technical Committee (TC) Co-Convenor Daniel Spinelli WG 07 ABNT (Brazilian Standards) and Co-Convenor Peter Harvey WG 07 BSI (British Standards) first led participants into a critical review, understanding and agreement of Terms and Definitions. This required exercise established a common base of terminology that would then be applied to three core standards areas under review. While tedious in dealing with semantics and nuance, such work promises to lay sound groundwork for what will soon become internationally accepted terms and which will then lay a solid framework subsequent work. 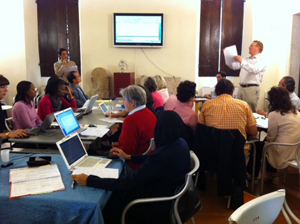 Shared views within the geographically and culturally diverse group of approximately 20 attending experts were that standards and certification are needed to protect clients, the businesses and the industry at large. For years (since 2004 according to several in attendance), nudged along primarily by ABETA, Brazil’s adventure and ecotourism trade association, professionals within the adventure tourism sector have sought to secure ISO standards recognition.

Pursuit by the Adventure Tourism industry is not new, as evidenced by the groundbreaking work of Explorandes Founder and President Alfredo Ferreyros, whose operation became the first in South America to achieve ISO 14001 standards for environmental management certification. (For background: http://www.examiner.com/ecotourism-in-national/ecotourism-certification-explorandes-peru-s-perspective-of-iso-14001-ems). 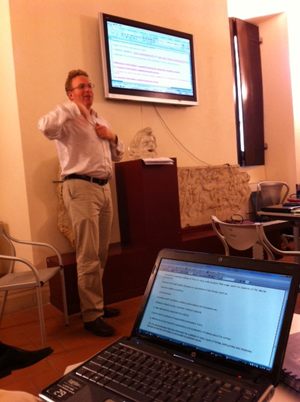 The purpose of the Working Group (WG) Adventure Tourism gathering, one of a good handful held throughout the larger ISO/TC 228 assembly in Italy, was to review, discuss and adopt expert comments from the field which were delivered prior to this meeting which resulted in the second draft of the following three standards areas under development:

Despite how specific and technical some of the discussions became, this participant appreciated the consultative process, one that led healthy consensus among professionals with vastly difference experience bases. It’s a long process to be sure. However, it is accepting of dissention. Because of that, it makes the ISO Standards stronger. But, to do it effectively, takes time. To this end, Peter Harvey, who was the two-day session’s chief facilitator, masterfully moved the group through each of the three standards categories. His deep understanding of the industry, issues and challenges of such a working group, was something to behold. In fact, the depth of expertise, discussion and debate among all participants was impressive.

Peter and Daniel together literally allowed every note delivered prior to the meeting to be reviewed. Each was accepted, annotated, or denied. The process was truly inclusive of all people who contributed. New Zealand, Brazil and Spain, in particular, came forward with strong opinions on numerous matters and were responsible for a large number of topics for discussion. Expert delegates – from Kenya to Bali, Korea and Trinidad & Tobago to name just a few – present for this ISO Standards gathering, represent some of the brightest in the industry. Voices were strong, opinionated and sharp. Few words were minced. Pettiness was left at the door. Most contributions were relevant and helped to usher in clarity, specificity and resolution to challenges, making the process less arduous.

A few interesting feedback anecdotes may help reveal the depth of discussion. Here are just few matters of import contributed along the way:

Most debates yielded movement and resolution, which ultimately led to a quality third draft of each of the three new ISO standards, which will be prepared in June 2011 for industry-wide review and comment before they are enacted upon adoption in the coming year. In the end, the importance of ISO standards for this category cannot be understated as countries are now investing more time, energy and budget as evidenced in the ATTA’s soon-to-be-released 2011 ATTA Tourism Board Survey concerning Adventure Tourism.

It’s also a fascinating process to observe the approximately 30 delegates from so many countries with different perspectives collaborate to come to common understanding and agreement on such technical matters. The original standards proposals were authored in Portuguese, translated to English. With the completion of round three, WG 07 leaders will put the finishing touches on the three aforementioned standards categories, then opened up for review by an international audience. Comments received from such a process will then be reviewed, considered, adopted – or rejected, before the final drafts are reviewed and edited by native English speakers before international releases.

The Adventure Tourism Working Group estimates the new drafts of the three new standards, details of which will soon be made available, will be presented industry wide in June 2011. The next official meeting of the WG 7 will be held in Rio de Janeiro, Brazil in October 5th to 7th, 2011. These same standards are estimated to be adopted and presented by the end of 2012. For more information contact Daniel Spinelli [email protected] or Leo Martins, WG 07 Secretary at [email protected].

ISO is a network of the national standards institutes of 162 countries, one member per country, with a Central Secretariat in Geneva, Switzerland, that coordinates the system.

ISO is a non-governmental organization that forms a bridge between the public and private sectors. On the one hand, many of its member institutes are part of the governmental structure of their countries, or are mandated by their government. On the other hand, other members have their roots uniquely in the private sector, having been set up by national partnerships of industry associations.

Therefore, ISO enables a consensus to be reached on solutions that meet both the requirements of business and the broader needs of society.

Standards make an enormous and positive contribution to most aspects of our lives.

Standards ensure desirable characteristics of products and services such as quality, environmental friendliness, safety, reliability, efficiency and interchangeability – and at an economical cost.

When products and services meet our expectations, we tend to take this for granted and be unaware of the role of standards. However, when standards are absent, we soon notice. We soon care when products turn out to be of poor quality, do not fit, are incompatible with equipment that we already have, are unreliable or dangerous.

When products, systems, machinery and devices work well and safely, it is often because they meet standards. And the organization responsible for many thousands of the standards which benefit the world is ISO.

More about the ISO: http://www.iso.org/iso/home.htm