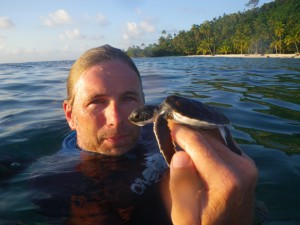 Scottsdale, AZ – Give a dollar; save a turtle. This appeal for donors to dip into their pockets to save creatures who stick out their necks comes from SEE Turtles’ Billion Baby Turtles Campaign. This simple but powerful effort seeks to help reverse the decline of endangered sea turtles around the world over the next decade.

The short-term goal is to raise $50,000 to save 50,000 new hatchlings through the end of 2013, with increasing goals in coming years. To date over a period of four years, SEE Turtles has helped to save more than 30,000 baby turtles at important turtle nesting beaches in El Salvador,Nicaragua and Costa Rica. Funding so far has primarily gone to support hawks bill turtles in the Eastern Pacific, perhaps the world’s most endangered sea turtle population, as well as critically endangered leather back turtles in Costa Rica. From January 1, 2013 to date, the campaign has raised more than $25,000.

“Odds are long for a baby sea turtle, even under the best of circumstances. But with all the human activities added to the mix, survival is a challenge. Survival to maturity may be as low as one in a thousand. That’s why we are raising the bar and aspire to save a billion baby turtles, because that’s what’s needed now,” said Nichols. Six out of seven species of sea turtles around the world are endangered or threatened due to, among other threats, poaching of eggs and turtles getting caught in fishing gear.

To determine which conservation projects receive funding, SEE Turtles has created a set of criteria including the status of the species, the importance of the nesting beach, and the level of community involvement. For more information on the program and how it works, please visit www.billionbabyturtles.org.