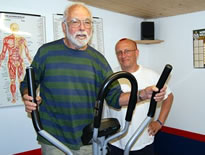 On the morning of 14 July 2010, George Solt, 82 years old, of Maidenhead, England, fulfilled his dream of becoming the oldest officially confirmed climber ever to reach the Top of Mount Kilimanjaro (5896m) in Tanzania. His climb also had the goal to be officially accepted by and published in the Guinness Book of Records. He accomplished the record together with 5 members of his family and supporting staff of UK based charity event organizer Action Challenge. The climb was locally operated by Arusha based professional Kilimanjaro outfitter Summits Africa.

The George group chose the Machame Route to bring George’s name into the book of records. They spent 8 days on the route, stood on the roof of Africa on the morning of 14 July and will descend to Mweka gate on 16 July. George prepared himself with a serious workout program and had been green lighted by his doctors to embark on his ambitious challenge. With George the successful climbing party encompassed 3 generations of the Solt family including his son and his wife and their 3 children, the youngest being 12 years.

To get accepted for publication in the famous record collection the group and the organizers have to follow some specific rules set by the Guinness World Records organization in London. The record attempt must be verified by independent witnesses, must be filmed and photographed and meticulously documented in a log book.

The George group chose Action Challenge as the organizer of the event because they have a longstanding experience in putting together successful charity challenges all over the world. Summits Africa was chosen as the local operator because of their high ethic and safety standards and the high standard of training offered to every member of the company. The chief guides of Summits Africa are not only first aid trained, they also have a First Wilderness Responder certificate which enables them to give professional first aid in remote regions such as the heights of Kilimanjaro.

SUMMITS AFRICA Ltd. is a successful Tanzanian company that offers top level climbs of Kilimanjaro, other mountains in East Africa and mountains around the world. In addition we offer bike challenges, event management and bespoke safaris. The company is based in Arusha, the safari capital of Tanzania. Summits Africa follows a strict no waste policy and is member of the Porters Assistance Project. We are the first operator in Tanzania to offset all our CO2 emissions against the protection of virgin forest in Tanzania.