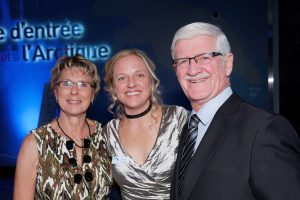 “This annual award honors individuals who have made significant contributions to polar bear conservation,” said Krista Wright, PBI’s executive director. “Merv and Lynda’s long-standing commitment to polar bears and their sea ice home deserves our heartfelt thanks and recognition.”

The Winnipeg couple helped put the town of Churchill, Manitoba—known for its annual gathering of polar bears—on the map. As the founders of Frontiers North Adventures, they made it possible for tens of thousands of people from around the world to see polar bears in their natural setting, letting them experience the bears up and close and personal from the comfort of a Tundra Buggy.

“We always say that once you see polar bears in the wild, it changes your life forever, inspiring you to care,” said Wright. “And that caring goes hand in hand with their conservation.” 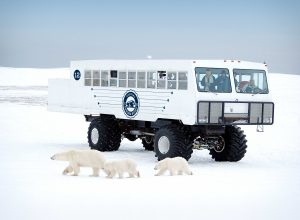 From the beginning, the Gunters have partnered with PBI to support efforts to conserve polar bears, generously donating countless hours on Tundra Buggies to PBI research staff and educators. Their specially outfitted Buggy One serves as a mobile broadcast studio, allowing PBI to air its live educational Tundra Connections webcasts from the shores of Hudson Bay. In addition, the Buggy streams live views of the polar bears as they wait for the ice to form. The Polar Bear Cams attract a worldwide audience, raising awareness of the threats to polar bears, and are broadcast in partnership with explore.org, PBI, Frontiers North Adventures, and Parks Canada.

PBI’s annual fundraising gala in Winnipeg takes place every year in late October or early November. All proceeds from the event support PBI’s conservation and research efforts in Canada, home to two-thirds of the world’s polar bears. The 2017 event included a special presentation by Jay Ingram, former co-host of the Discovery Channel’s Daily Planet, a dinner, silent auction, and more.

Merv and Lynda Gunter remain involved in Frontiers North in an advisory capacity while their son, John Gunter, carries on the family tradition as the President and CEO, leading the company towards its growth and sustainability targets. Frontiers North remains a Platinum Sponsor of PBI, offering generous support for our research, education, and boots-on-the-ground conservation efforts.