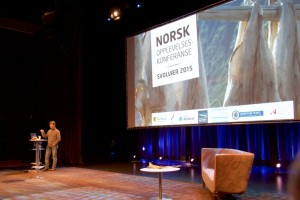 ATTA’s Executive Director in Europe, Chris Doyle, speaks at the Adventure/Experience Conference in Norway in October.

By Chris Doyle and Ulrika Larsson

With the United Nation’s COP21 (also known as the Paris Climate Change Conference) gathering starting up this week, we’re reminded about the very real challenges we face today and why there is an urgency to tackle them now. Reading the news about this fragile, controversial and essential meeting, serves as a solid reminder about how the adventure tourism sector is poised to thoughtfully disrupt the traditional mass tourism model.

Looking back just a few weeks, the ATTA attended and presented at the Adventure/Experience Conference in Lofoten, Norway. Hosted by Innovative Opplevelser (“Innovative Experiences,” an ATTA member and collaboration of operators, funding agencies and research and educational clusters located in the northern part of Nordland), the conference attracted more than 300 professionals — more than 50 of whom attended the ATTA’s AdventureConnect. During these days, a range of topics centered around innovation and value creation resulted in fantastic dialogue, including reflections about how climate change is affecting the very essence of what Norway can and will be able to deliver in tourism in the years to come.

One of the main messages from Innovation Norway was that Norway, which has had a very privileged situation for a long time (strong income from the oil industry), now needs to adapt to the rest of the world in terms of possibly recreating their national identity and find something “new” that can replace oil as the most important income for the country. Norwegians are fully aware of the assets they have, but they need tourism that is sustainable and ready for the future. The general attitude among people in the tourism sector is that they want to collaborate and there is a strong belief that they need to reinvent themselves to be able to adapt to the needs of the future traveler. The ATTA’s Adventure Tourism Development Index (ATDI) 2015, which reports that Norway is climbing on the list, helps to provide yet further impetus to focus on adventure travel. 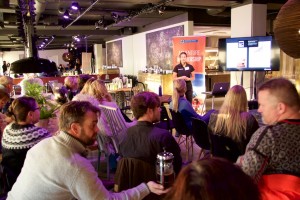 Nordic members of the ATTA community meet up in Lofoten for an AdventureConnect.

Norway’s self-awareness about the need to reinvent itself is emblematic of a rather intriguing set of traits among the great adventure travel minds from Norway (and the Nordic region in general) – the region’s unquenchable commitment to innovation, community, collaboration, value creation, professionalism, pushing boundaries and improvement. Perhaps these traits are born of necessity to manage during harsh weather and unforgiving geography intertwined with often isolated, other-worldly landscapes.

Such features are contributing to growing consumer demand globally for what is largely available throughout the Nordic region – remote wilderness, dramatic environments, raw nature and culture, culinary diversity and…silence, water, whales and wildlife, Arctic geography, Northern Lights, progressive adventure sports, innovative experiences, diverse and ancient heritage – all of which is becoming more and more scarce in a world where unique, off-the-beaten path destinations with a soul are becoming harder and harder to find.

With this in mind, Norway is bracing itself for its very near future and exploring ways to take serious measures now to design and manage its own future to prepare for, manage and adapt to an expected new wave of travelers heading north. With more than 30 years of engagement in the area of sustainability, it is now a part of Norway’s DNA. Among the 70-plus Norwegian ATTA member organizations reside powerful examples of specialized tourism done right.

While there is solid awareness about the need for responsibility among the more than 2,000 tourism businesses throughout Norway, leaders there still recognize that only a few dozen businesses are active ecotourism enterprises.

That said, at the destination level, several regions are already leaning toward a more responsible path. For example, in Lofoten where the conference was held, they increasingly recognize the value and very special nature of the local stockfishing heritage and economy and its link to other regions and tourism. They appear to be taking every measure possible to take care of this treasured resource – one of the world’s largest, year-round fisheries — to connect it to other activities and niches in the region, then find ways to bring them to international tourism market through managed, sustainable methods. 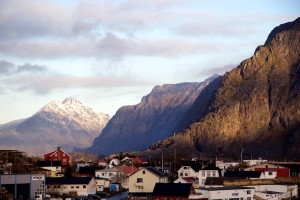 Collaboration also emerged as a key theme at the conference. Mikael Forselius, the director of Röros Hotel in Northern Norway, offered delegates innovative and creative examples from the small town of Röros, a UNESCO Heritage Site. To be able to better communicate why travelers would want to come to Röros, they had to identify exactly what they had to offer. They soon realized that was food. The culinary experience has been enhanced after several local businesses came together and initiated a collaborative concept where the joint businesses are viewed by the tourist as a single enterprise, making it easier for  guests to handle payments, for example. They’ve done a unique refining of the locally produced products while ensuring that the authentic feel is present in every detail. They want to tell the stories of the cafés, the restaurants, the food and the people of Röros. “There needs to be a meaning with everything they do,” said Mikael. Apparently, the Röros strategy is working as evidenced by their finalist status in the National Geographic World Legacy Awards in the Destination Leadership category.

Another compelling example of collaboration presented at the conference was that of Svinöya Rorbuer. As in many other destinations around the world, Norway suffers from short tourism seasons, which was a recurring theme during the conference. On stage, Ola Skjeseth from Svinöya Rorbuer shared his story on how he and his crew turned his seasonal business into a company offering year round activities, resulting in a busy winter which is normally their off-season . They now offer plenty of Northern Lights trips, plus they are collaborating with a local sea kayaking business to create more reasons for people to come to Svolvaer, Lofoten. During the rest of the year fishing trips is the main activity for them. At the moment they employ fifteen people on a year round basis and the company was nominated for the best tourism awards in Norway this year.

Ola has a deep commitment to this location and he wants to make sure that Lofoten, which has survived without oil for more than 1000 years, will survive another 1000 years, and believes that sustainable adventure tourism is the way forward.

Norway is now exercising its expertise in sustainability theory and research. Leaders here are shifting from discussion and debate to how they will gain a better day-to-day-working understanding of how to make sustainability practical and have impact on the ground.

Norway, as a destination and represented by its business community, with its legacy in sustainability, is now in the rather unique position to take necessary next steps to go further — to put into practice nationwide the efforts that can help the country to be recognized globally as a leader in sustainability.