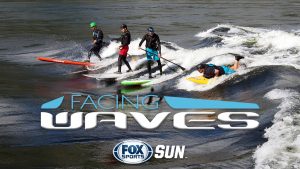 Heliconia, producers of Facing Waves, is proud to announce the launch of Season 5 on FOX Sports Sun on Friday, March 31st at 3 p.m. EST.

Facing Waves is an exciting and inspiring TV series that follows top paddlers as they explore the people, places, and adventures of the world’s top paddling destinations.

The first episode of the season, Paddling BC’s Sunshine Coast, follows husband and wife duo Luke Hopkins and Anne Pagano as they explore the region by sea kayak, and then put their stand up paddling skills to the ultimate test surfing the world renowned Skookumchuk tidal rapids. The episode will premiere on FOX Sports Sun on Friday, March 31st at 3 p.m. EST.

Now in its 6th season of filming, Facing Waves is an adventure travel TV series that tells the story of the people, places and adventures of a destination through a paddlesports journey. The series is currently broadcast on FOX Sports Networks, Outside Television and Nautical Channel reaching ninety million households, in three languages and forty countries.