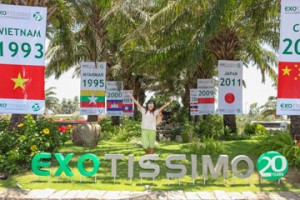 Bangkok, THAILAND – Exotissimo Travel recently celebrated its 20th Anniversary in the ancient city of Hoi An, Vietnam, with a three day event involving close to 400 employees. Exo staff from across the world including North and South America, Europe, Australia and the eight destinations they serve in Asia came together to celebrate the anniversary in style.

Staying at the Palm Garden Resort, all attendees participated in Vietnamese themed team building exercises and were treated to a talent show where groups of staff performed various dances and singing acts. There was also a discovery tour of Hoi An, revealing this picturesque and historic city. The weekend was a time for Exotissimo staff to join together, let their hair down, catch up with old friends and share a common passion for travel.

Olivier Colomes, CEO of Exotissimo Travel said after the event, “The greatest challenge we faced was to bring the majority of our staff from all our destinations, head office and sales offices, nearly 400 in total, to one place for the 20th anniversary celebrations. The result went far beyond our expectations thanks to the commitment of everyone involved. It was a weekend full of highlights that will be forever etched in the history of our company”.