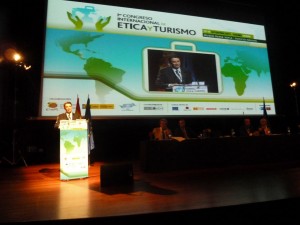 United Nations officials stressed that the tourism industry must ensure it does business in an ethical manner, saying that irresponsible travel could harm societies and the environment despite its benefits to the global economy through job creation and community empowerment.

“A tourism sector without an ethical conscience can harm our planet,” said Taleb Rifai, the Secretary-General of the UN World Tourism Organization (UNWTO), at the opening in Madrid, Spain, of the first International Congress on Ethics and Tourism.

“We need to place ethics, responsibility and sustainability at the core of all our actions and ensure the adoption of and adherence to the principles of the Global Code of Ethics for Tourism,” said Mr. Rifai.

In his keynote address to the two-day Congress, the UN High Representative for the Alliance of Civilizations, Jorge Sampaio, called for shared responsibilities in tourism.

“Sustainability requires a common vision of basic values in our increasingly interdependent world,” said Mr. Sampaio. “Because it involves the movement of millions of people, tourism can play a pivotal role in creating a shared sense of responsibility.”

Mr. Rifai highlighted the theme of this year’s World Tourism Day, which will be ‘Tourism – Linking Cultures,’ as a clear example of the potential of tourism to contribute to the aims of the UN Alliance of Civilizations, an initiative launched in 2005 by Spain and Turkey under UN auspices to promote better cross-cultural relations worldwide. The Day is marked on 27 September.

“With nearly one billion tourists crossing international borders, tourism is one of the best way for people to experience, interact with and learn from new cultures. This cultural exchange spurs dialogue among nations and peoples, fostering mutual understanding, respect and ultimately, peace,” he noted.

At the Congress, UNWTO and the UN Alliance of Civilizations signed a memorandum of understanding to strengthen relations and formalize UNWTO’s support for the Alliance’s mandate to “improve understanding and cooperative relations among nations and peoples across cultures and religions.”

Organized by UNWTO and Spain’s General Secretariat of Tourism and Domestic Trade, the Congress has brought together more than 450 tourism officials, business leaders, international organizations and experts in the field of ethics and tourism to debate how to guarantee responsible and sustainable tourism.

Issues to be discussed include gender equality, tourism’s role in poverty reduction, sustainable tourism practices in both the public and private sector, and codes of ethical conduct.