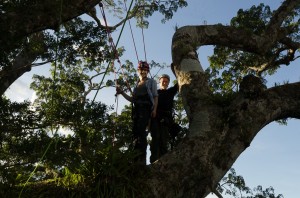 All the way from England, Television Presenter Alex Zane traveled 100km Southeast of Manaus, Brazil, to the Mamori Region for the climb of a lifetime on Monday, March 17th. A member of the Fox TV team, Zane took his cues from Leonide Principe, expert climber and co-owner of the ecotourism company, Tropical Tree Climbing. “I wanted to give Zane a bird’s eye view of the Amazon, and that requires just a bit of climbing!” said Principe, leading the group of press deep into the trees. 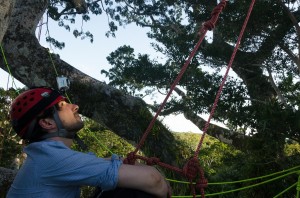 Zane, on assignment ahead of the March 28 release of the children’s animated film Rio2, couldn’t wait to see in person what is captured in the film:

Zane climbed a Samauma tree of the ceiba pentandra family using the “assisted tree climbing technique,” specially used for film crews, the aged, physically-challenged adventurists and climbers who would like the support of an expert. Pedro De Capitani, assistant climber, notes Samauma trees are regularly chosen as the climbing tree of choice in Tropical Tree Climbing tours, ranging from a 1-day climbing excursion to a 7-day immersion birding and climbing combination.