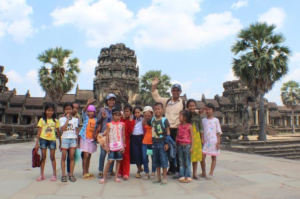 Responsible Travel has announced that Elevate Destinations is one of the 75 organizations longlisted for the 2016 World Responsible Tourism at WTM London. It is the only tour operator on the list based in the United States.

Organizations in the running cover a diverse range of issues in responsible tourism, from campaigning and innovation to poverty reduction and the inclusion of marginalised people to wildlife and habitat conservation.

Elevate Destinations as been longlisted in the category of Best Innovation by a Tour Operator for its Buy a Trip, Give a Trip initiative, in which a portion of each trip sold pays for a travel excursion for local youth, allowing them to see tourist attractions in their own countries. Elevate is the first and only tour operator to apply the one-for-one giving model to the tourism sector.

Dominique Callimanopulos, founder of Elevate Destinations, describes how her innovative vision was hatched. “It is a fact that few locals have the means to visit the very sites that makes their countries attractive to tourists, who spend a lot of money traveling to those sites every year. I felt that offering the same opportunity to local youth sends a message of equanimity, empowerment and equal opportunity to local communities and provides both an educational perspective and feeling of ownership of national resources for those communities.” 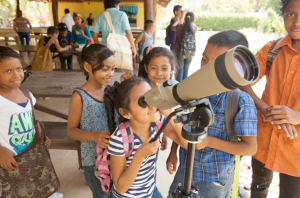 On being longlisted for this prestigious award, Dominique adds, “We’re thrilled to receive recognition and raise the profile of our buy-one give-one initiative, which can only help to expand its reach. We have a busy year of buy-one give-one trips ahead!”

Justin Francis, managing director of Responsible Travel and founder of the Awards says “This is an exciting time of year – it’s when we first get our real glimpse into diversity of the stellar work being done in responsible tourism worldwide. For me this is a clear indication that the wider tourism industry is really recognising the importance and benefits of operating in a responsible way”.

Commenting on the standard of the entries, Chair of the Awards judging panel, Professor Harold Goodwin, says “We have an extremely strong field across all the categories and our judging panel will have some difficult decisions to make later this year. Each of the 75 longlisted organisations will now be invited to complete an in-depth review, and provide us with evidence and references to support the impact their work is having.” He adds “It is going to be harder than ever to win this year”. 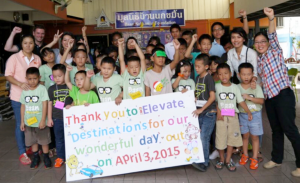 Simon Press, Awards Judge and Senior Exhibition Director at World Travel Market in London, where the 2016 winners will be announced in a special ceremony as part of World Responsible Tourism Day is looking forward to celebrating the eventual winners “The 2016 Longlist is a real indication of the calibre of winners we will have this year. I’m looking forward to celebrating 10 years of World Responsible Tourism Day in November by sharing the stories of some of the most innovative, inspirational and effective responsible tourism initiatives we’ve ever seen”.

Representing a huge diversity of work in 30 countries worldwide, the longlist includes; a hotel in Dubai rescuing, rehabilitating and re-releasing turtles and educating guests and local children about conservation;  an association of hotels and restaurants in Kerala working together to ensure food isn’t wasted and that no-one in their community goes hungry; a tour operator in India making heritage sites, street food markets and festivals accessible to all through sensory tours and tailored assistance;  a campaign to stop child abuse in tourism in Cambodia; and a hotel offering employment, training and empowerment to refugees in Austria.

The full longlist is available at: http://www.responsibletravel.com/awards/media/longlist.htm

The 2016 list of finalists will be released in August, with the winners announced in a special ceremony at WTM London during World Responsible Tourism Day on 8th November 2016.