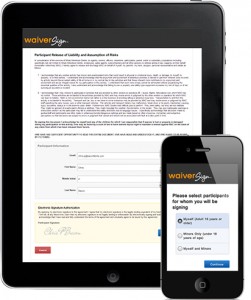 Salt Lake City, UT – Member ranches of the national Dude Ranchers’ Association perked up their ears at a recent gathering where they enjoyed a presentation about a new-fangled digital liability release process called WaiverSign that goes a long way to eliminating human error and paperwork.

“The response was overwhelming,” said presenter Brandon Lake of WaiverSign headquartered in Salt Lake City. “These folks would rather be out riding the range and providing incredible guest service than filing papers, and that’s where WaiverSign comes in.” This is a paperless liability waiver application that allows guests to electronically a sign a waiver even before they arrive at their dude ranch for vacation.

Since the recent conference, Lake said more than a dozen ranches have signed on to integrate WaiverSign (http://waiversign.com/) into their busy lives. Some ranchers who had been using the new system for awhile advocated for WaiverSign at the conference.

Laurence Kaplan who owns Red Reflet Guest Ranch in Ten Sleep, WY, said the waivers are signed electronically before guests arrive. “The process is just so simple and the waivers are not lost in the filing stack! The experience of moving to paperless has been positive, simple and painless! The KISS principle has been applied and works well.” Based on this satisfaction and the fact that WaiverSign helps the business look even more professional, Kaplan is recommending the system to other colleagues.

The President of the association, Douglas Hare, who is general manager of The Red Rock Ranch near Jackson Hole, WY, said that prior to using WaiverSign he used printed waivers that people signed when they checked in. Hare states that he “often had to track them down to get them to sign at some later point. This created a liability issue.”

Hare has now used WaiverSign for two years. “The system has streamlined office time immensely, being the small business that we are. My office time is unfortunately too much when I should really be focusing on guest services. WaiverSign has made my life easier and my time in the office less. And I am more secure now that the waivers are signed before guests show up.”

He said that he did confer with his legal advisor before making the switch from paper to digital. The waivers are held on the WaiverSign servers. “There’s very little that we had to do short of creating an account with them. They’re way advanced. They’ve thought of everything.” He said the digital waiver can even be taken on an iPad in a ranch vehicle for initial guest pickups. “Transportation is covered before they get in. We’re as legally covered as we can be.”

On the edge of Grand Teton National Park is Moose Head Ranch. Louise Davenport, proprietor, has had three summers with WaiverSign under her belt. “Horrible” is how she described the paper process before WaiverSign.

She’s relieved not to be sending out five pieces of paper for every member of a family planning to be a guest here. “Everything is on line. The storage is what I love.” Before she said there were filing cabinets full of waivers from “way back when because you were afraid to throw them out.”

She plans to put information about WaiverSign on her website so “people can’t come back to me and say they weren’t aware they would have to sign a waiver.”

Lake added that nearly half of ranches in attendance showed “direct interest in digital waivers. Immediately following the presentation, we were excited to see such a positive response.  Many of those are already in the free trial period, and we expect them to become full fledged accounts.”

WaiverSign allows companies to easily create and execute digital liability waivers, release forms and rental agreements that participants can read and sign online in advance of arrival or upon arrival to an activity, by using a desktop computer, tablet or phone. The business simply provides a link to their participants.

Because participants are emailed a copy of their signed document, businesses using WaiverSign have also reported an increase in participant emails gathered as well as accuracy of those email addresses.  “An additional benefit emailing the signed waiver,” says Lake, “is that it helps with the issue of a participant claiming that they never received a copy of the waiver and didn’t have time to fully read the waiver before their participation.” This is often a common defense with paper liability waivers as participants often sign the waiver without reading upon check-in and never receive a copy.

Companies using WaiverSign’s electronic waiver system have reported huge savings in time and cost when compared to their previous paper processes.  They also love the fact that waivers are securely stored and backed up for the time they use the system and that they can be retrieved within seconds.

WaiverSign calculates that companies processing 8,000 waivers a year with WaiverSign will save more than $5,000 over paper waivers in time, labor and materials.

The WaiverSign application is designed for recreational tour and activity providers, yoga and martial arts studios, exercise facilities, tanning salons, trampoline and inflatable party and play areas, and any businesses and venue that requires liability release and/or assumption or risk documents.