*Special thank you to these individuals who contributed to the Indigenous Tourism session as speakers or moderators.

Keith Henry of ATAC shared a video highlighting the story of the Wendake Tourism experience near Quebec City, Quebec.

During the Adventure Travel World Summit (ATWS) in October, 2016 the ATTA held a session centered around Indigenous Tourism Development. The ATTA has been supporting the World Indigenous Tourism Alliance (WINTA) for several years through pre, post or incorporated ATWS sessions. Due to the location in Alaska, the ATTA felt it was critical to bring the voice of the Native Alaskans and Indigenous communities of Canada to the forefront.

As you’ll read below a lot of great activity is taking place in building and strengthening Indigenous travel product and now the call goes to the adventure community to more seriously consider partnerships and sell the product. And while there is revenue and growth to consider, it is necessary to note that while the financial part is important, the social opportunities of cultural pride, retention of locals in their home regions, preservation of cultural heritage, and development of skills is paramount. The fact that these issues can be rationalized by income is the magic of the adventure travel industry. It is clear that indigenous people illuminate adventure travel’s three pillars of nature, culture and activity.

During the Question & Answer portion of the Summit session one key topic was brought up – what is the effectiveness of Aboriginal tourism operators? The answers centered around the improvements that are being made around product development and the panelists also gave advice on how to develop effective relationships and partnerships with Indigenous tourism operators and communities.

Two speakers emphasised the ‘value proposition’ for the adventure tourism industry.  Partnering with Indigenous tourism operators and communities offers the opportunity to enrich current tourism programming and tap into incredible Indigenous culture and knowledge through authentic and unique storytelling and experiences. For existing non-Indigenous operators, this is a ‘value added’ opportunity to create unique tourism products in genuine partnership with Indigenous owned and operated ventures. 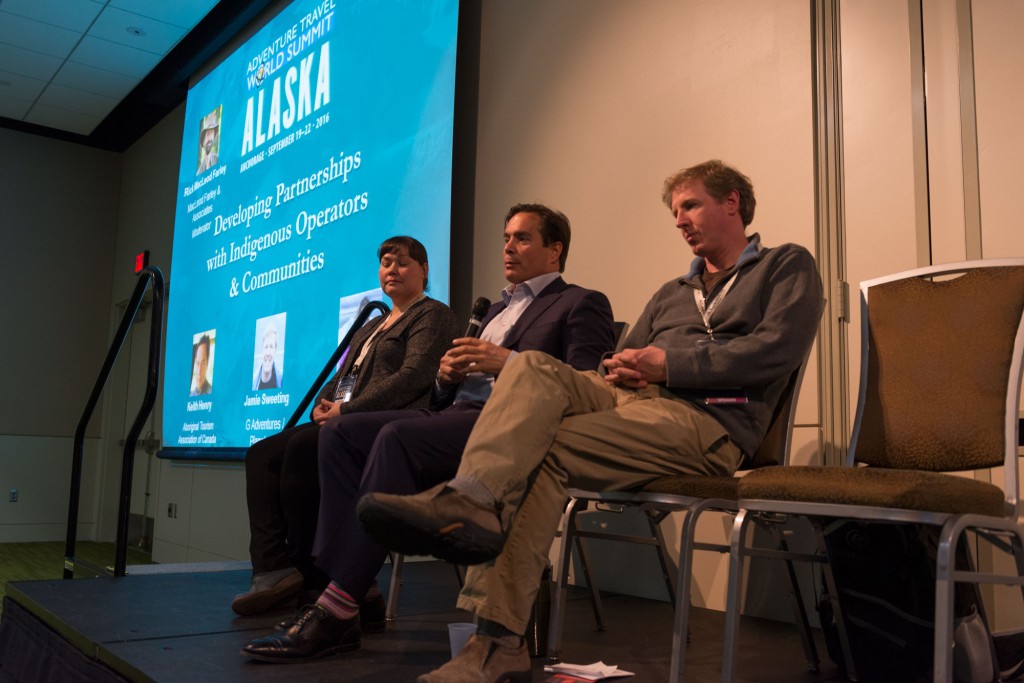 As a way to capture the learnings from the sessions conducted outside the Summit, at a grass roots discussion at the Alaska Native Heritage Center, as well as during the Summit session, we will share the background and perspectives from several key leaders who joined our sessions.

On September 20th, Stephen kindly hosted an Indigenous Tourism Gathering & Round Circle Discussion at the Alaska Native Heritage Centre. Stephen shared some of the rich history of the Centre and the challenges and successes over the last thirty years or so for the centre and for Alaska Natives more broadly. He also provided context on the Alaska Native Corporations which began in the 1970s related to land claims and resource development.

Keith Henry talked about the importance of authenticity for Indigenous tourism, and the need for Indigenous owned and operated tourism entities to share their story in their own voice.  ATAC is the national marketing and product development agency that works on behalf of over 1500 aboriginal tourism sector businesses located in the 10 provinces and 3 territories of Canada.

Keith indicated that he sees three major gaps from his position at ATAC – marketing, access to capital, and a trained workforce. He stressed that the demand for quality Indigenous tourism products greatly exceeds the supply, and that “we need to make it easier for buyers to find us.”

Fresh 2015 data included in ATAC’s five year plan shows the economic impact of Aboriginal tourism in Canada with over 33,000 workers employed, $870 million in wages and salaries, $2.65 billion of gross output and $1.4 billion GDP for Canada.  Since 2002, the number of Aboriginal tourism businesses has more than doubled, and direct employment in the sector has almost tripled.

(3) Leadership. Current milestones include presentations to the Canadian Council of Tourism Ministers and the Assembly of First Nations Annual Assembly.

Kylik spoke about his experience as a young Indigenous tourism business owner and operator based in Inuvik, Northwest Territories, Canada. He shared the challenges involved in Indigenous tourism development, noting that government tends to provide ‘general’ support for tourism marketing and development and avoid contact with actual operating businesses. He strongly advocated a greater support to help actual operators generate actual sales.

Born and raised in the village of Kuujjuaq, Nunavik (Arctic Quebec) and now the Tourism Programs Coordinator for the KRG’s Sustainable Employment Department, Victoria recognizes the importance of developing economic opportunities that will enhance social, cultural and ecological well­ being for Nunavik communities.
Victoria presented on Nunavik and shared all the work they have done in the past five years to successfully create their market ready tourism products and services. Nunavik in Northern Quebec is inhabited by close to 10,000 Inuit who live in 14 modern villages along the coasts of Hudson Bay, Hudson Strait and Ungava Bay. Only four of these communities have populations of more than 1000. These are Kuujjuaq, Puvirnituq, Inukjuak and Salluit. While the people’s mother tongue and regular language of communication is Inuktitut, many Inuit speak English as a second language and some French as well. No roads connect Nunavik to southern Quebec and the region’s communities are all isolated one from another. Daily scheduled air service from Montreal to Nunavik is provided by two Inuit-owned airlines, First Air and Air Inuit. Kuujjuaq is a two and a half hour flight from Montreal.

Even though the Nunavik Inuit way of life is more diversified today than in the past, hunting, fishing and gathering activities for subsistence purposes remain central to life in Nunavik. 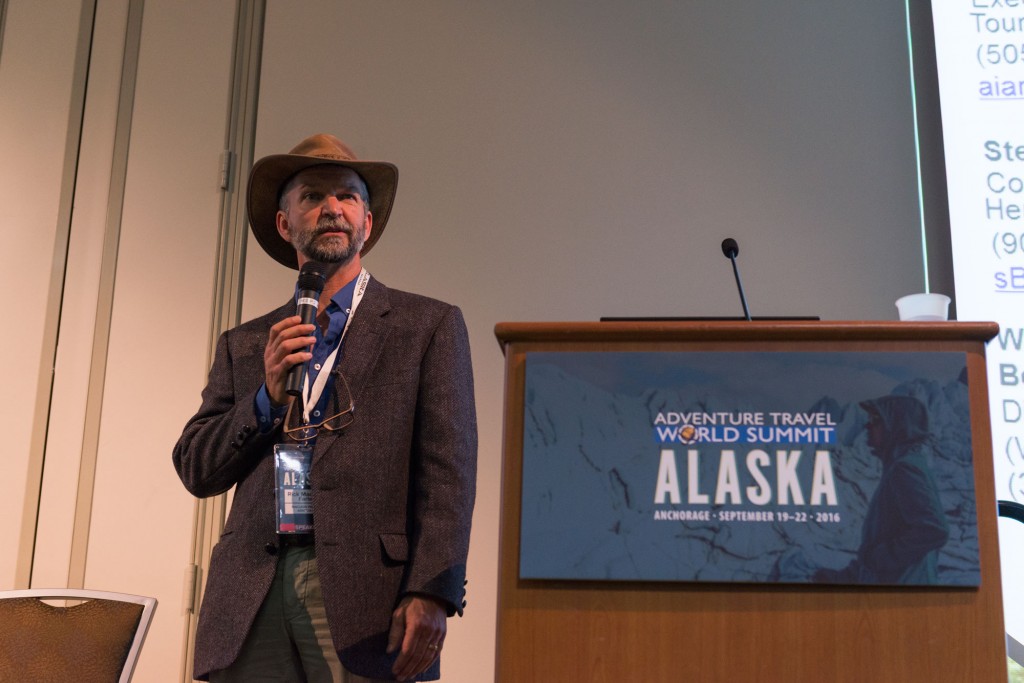 Victoria explained that the Nunavik government is supporting tourism development to generate employment and to be an important ‘economic driver’ for sustainable economic development. It provides full time, part time and seasonal work for youth, adults and elders. Tourism activities include hunting, fishing, dog sledding, kayaking, trekking, observation of wildlife, cultural activities and Nunavik Parks. With tourism, Nunavik has noticed the decline in hunting and has developed market ready tourism products focusing on culture and adventure.
Victoria shared information on training activities from 2014 through 2016 which included Arctic Guide Training; Cooking and Meal Preparation; Light Vehicle Mechanics; First Aid and Wilderness First Aid; Hotel Management; Restaurant and Food Service; Art Workshops including jewellery making, traditional sewing, and carving; as well as Accounting and book-keeping. Victoria indicated that there have been a total of 882 training module participants in the last three years.

The key elements of the Nunavik Tourism Vision:

Allen shared some of the Nunavik Inuit story including the land claims (which involved the Nunavik Inuit, the James Bay Crees, and the Quebec government) and the Nunavik tourism development process. He noted some similarities to the Alaska Native history since the 1970s. Allen sees ecotourism as very important and he specifically noted the decline in the George River Caribou Herd which was 780,000 strong in the early 1990’s, and is now down to about 8,000.

Sean shared information on Arctic Adventures (focuses on fishing) and Inuit Adventures (focuses on culture and ecotourism). To support their Nunavik Tourism Association tourism efforts, they have negotiated discounted rates for flights ($1,500 instead of $2,500) to access the region. They have seen a strong European market interest and Sean (who noted he has Irish background and is not originally from Nunavik) indicated that he sees great value in the local communities’ strong Inuit language and culture. Nunavik has an Inuktitut immersion program for children up to grade three.

Adrienne Fleek introduced herself to the group and noted that she works as an Alaska Native Affairs Liaison with the National Park Service.  She shared some of her experiences working for parks and with Native Alaskan communities. Just this past June Adrienne worked on shifting the demographics of NPS staff in Alaska to better represent the number of Alaska Natives and American Indians as living in Alaska.

Mary is on the executive team of Nunavik Tourism Association and she shared some of her experiences in Nunavik as well. She has been an active part of the adventure travel community for many years, attending the last four World Summits and bringing her perspective to the delegation.

Jamie is the President of Planeterra Foundation and VP for Social Enterprise & Sustainability at G Adventures. Jamie shared a video that tells the story of a special project, Café Chloe, that  was supported with a $20,000 catalyst grant by Planeterra Foundation. The video starts by noting the high rate of unemployment amongst Aboriginal youth and that Aboriginal youth hunger for more job opportunities.

Café Chloe in Tully, Australia, was developed in partnership with Ingan Tours. Ingan Tours is an Australian company that is 100% Aboriginal owned by the Grant family in Tully, North Queensland. Café Chloe is located in a railway station that had been abandoned.  The railway station has now been restored to serve a dual purpose; it’s both a vocational training café and a cultural arts centre for Aboriginal women and youth. Café Chloe is run entirely by the Janbanbarra Jirrbal community, who have lived in the Tully region for centuries.  Aboriginal youth are engaged now in training and skills development at Café Chloe, and the community envisions this continuing for many years ahead.

G Adventures offers several tours with Ingan Tours. Guests enjoy visits to small, local villages where they are hosted by the local Indigenous people (Janbanbarra Jirrbal Rainforest people) and enjoy learning about their creation story, their way of life and their relationship with the land.  Guests then have a hands-on experience painting what they have learned on a boomerang.

Jamie also spoke more broadly about G Adventures and Planeterra and the work they do all over the world in partnership with Indigenous Tourism business operators and communities.

Rick MacLeod Farley has worked with and for Indigenous communities on tourism and community economic development since 1990. In May 2016, he offered to speak at the ATWS in Anchorage (on Indigenous tourism project development and financing), and ended up getting involved in the planning for the Indigenous sessions at ATWS. To do this, Rick worked with Keith and Stephen, along with others who could not attend despite their interest in being present (Ben Sherman of WINTA, Camille Ferguson of AIANTA, and Charlene Alexander of Yukon FNCT.

After moderating the main ATWS session, Rick presented a short workshop focused on Indigenous Tourism project development and financing. He shared detailed financing tactics to a group of about twelve participants.  A copy of the presentation is available from Rick upon request.