For many people, the idea that sex trafficking even exists is mind-boggling, but the problem is far more widespread than most people realize. According to statistics gathered by Equality Now, there are 20.9 million sex trafficking victims globally, 96 percent of whom are women and girls. This is a $99 billion USD industry, trapping countless victims into commercial sexual servitude and labor. The fact the United Nations has established 30 July as the World Day Against Trafficking in Persons speaks volumes about the severity of the issue. 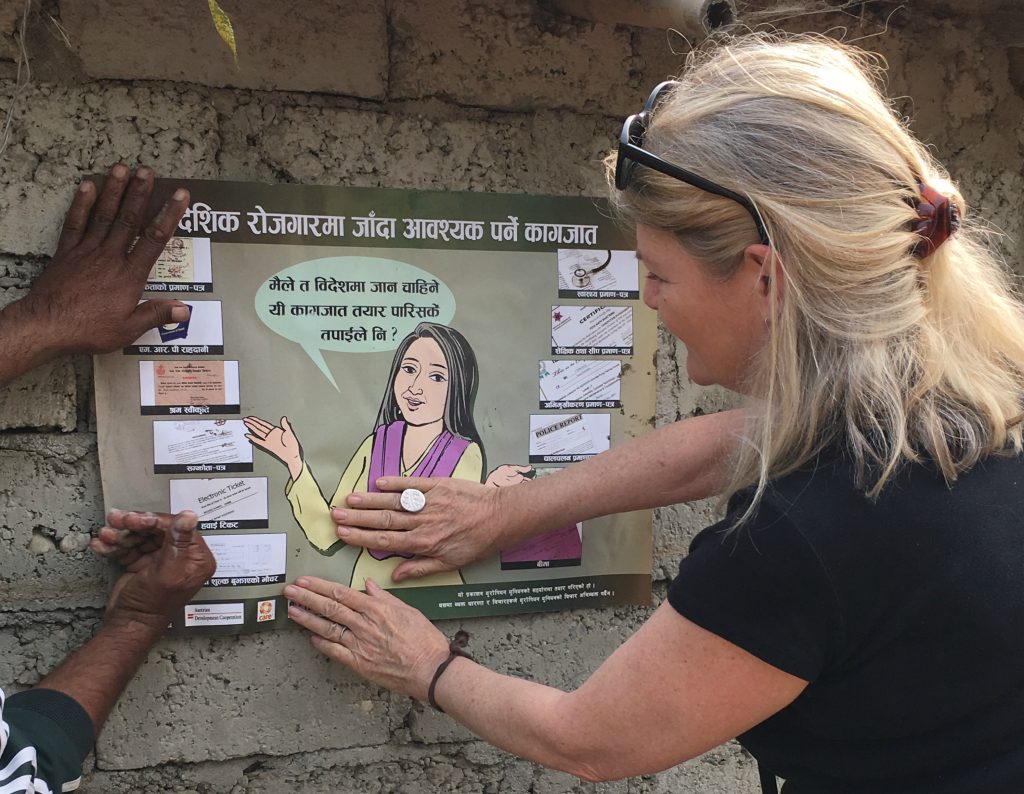 Debbie Daniels hanging a poster about sex trafficking prevention on a visit to a border town in Nepal. © Christine Mackay

Christine Mackay, co-founder and executive director of Crooked Trails, was also keenly aware of the problem, but it wasn’t until a trip to northern Thailand in 2000 that she became motivated to address it. Eager to do her part, she raised funds to support organizations fighting sex trafficking in Thailand but then moved her efforts to Nepal, where girls are kidnapped or lured from their homes over the border to India and put to work in brothels. She also learned about Maiti Nepal, an organization established by humanitarian Anuradha Koirala, which helps prevent trafficking for forced prostitution, rescues victims, and rehabilitates them.

With her tourism background, Mackay realized there was an opportunity to share and support Maiti Nepal’s work to Crooked Trails’ clientele through humanitarian trips. The company’s first sex trafficking-focused trip to Nepal took place in 2013. In the five years since then, Crooked Trails has given travelers an opportunity to learn from the organizations working tirelessly to free women and girls from sex trafficking. “What we’re trying to do is bear witness to the fight against sex slavery and to meet with the staff on the front line of that fight and, by doing so, support their work,” Mackay said.

These tours, which tend to attract women, appeal to travelers interested in a deeper, more meaningful travel experience. “I was looking for service-oriented travel, but I didn’t really want to do a traditional service project,” said Amy French, who traveled with Crooked Trails to Nepal in 2013. “I liked the idea of doing something that was bearing witness to something that was going on and not taking part in that “savior” trend where you fly in to try to fix something,”

Prior to these trips, Mackay recommends participants watch a few suggested documentaries and read selected books. Further, she asks the non-governmental organizations with which travelers will be meeting what they’d like participants to know as well. “I expect people to arrive in the country with some understanding of the issue so that they’re not so naive,” she said. Mackay works closely with in-country NGOs to ensure all travelers are aware of and follow established guidelines that maintain a high level of respect for sex trafficking victims and those working with them. For example, photography and recording are prohibited, and participants occasionally have to sign waivers. “There’s a lot of sensitivity in this area to protect the privacy of those we meet,” she said.

Additionally, all travelers are asked to raise $750 USD that goes to the NGOs they will be meeting, and some people raise even more money. In return, they receive an on-the-ground education from those actively combating sex trafficking every single day.

Armed with their pre-trip education, travelers have some knowledge about sex trafficking prior to departure, but it’s not until they’re actually face-to-face with it that the depth of the issue is apparent. French said she didn’t fully understand the full scope of sex trafficking until she was witnessing Maiti Nepal’s work. “The issue is very multi-faceted, and Maiti Nepal isn’t just rescuing girls, but they’re also intercepting them at the border. They are doing rehab and prevention programs, and they’re starting to become involved with prosecution efforts too,” she said. “It was really powerful to see the strength of these young people going out and talking about the realities of what this looks like.” 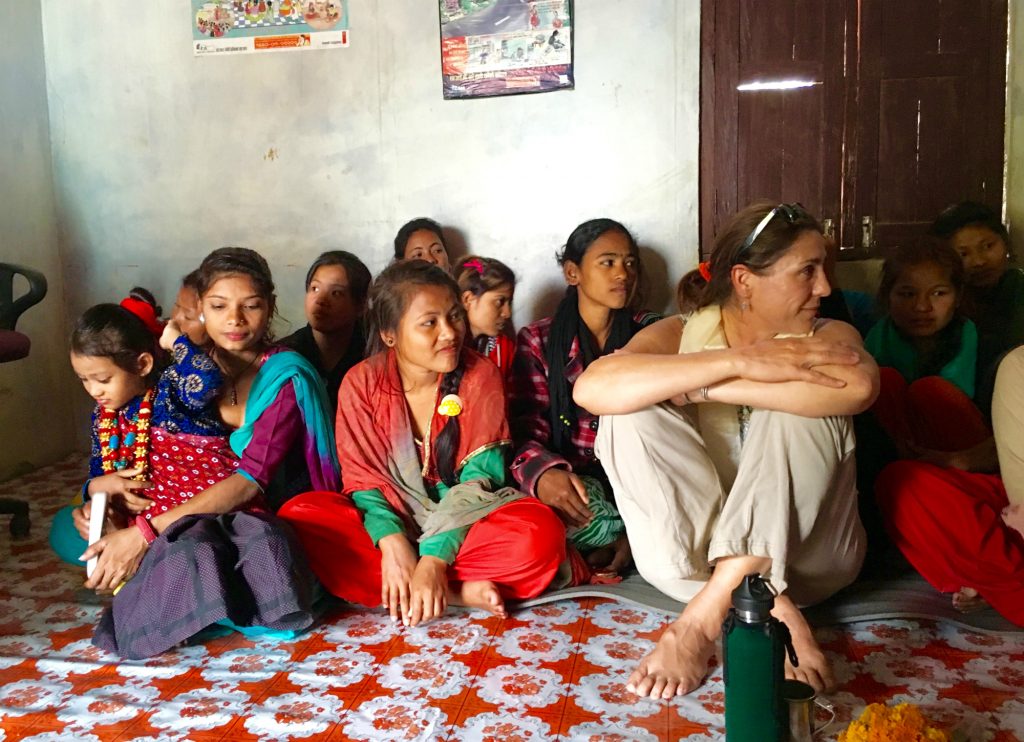 Mackay at a prevention school where girls are given a basic education and skills training and taught about human trafficking. © Christine Mackay

But beyond the devastating reality of sex trafficking is a message of hope, and travelers are educated not only about the events leading up to victimhood but also the positive and important work that happens after girls and women are rescued from it. Debbie Daniels, who traveled with Crooked Trails to Nepal in 2015 and 2016 on these trips, said the girls’ strength has stuck with her. “To be with these girls who have been given a chance to get their lives back again — their solidarity as young women together and how they’re doing this without their families — is incredible. Watching their spirit of hope, positivity, and willingness to help each other was stunning. Just stunning,” Daniels said. “That will stay with me forever.”

Up to this point, Crooked Trails has led sex trafficking-focused trips to Nepal and Thailand, but will offer its first program in India in September 2018. The group on this trip will meet with NGOs working at the forefront of the fight, go into the red-light district to learn about the issue, and meet with young women who were born in the brothels. “It’s an intimate look at the issue and is meant to inspire people to be a part of that fight, whether it’s locally or abroad,” Mackay said. She plans to offer one such trip a year, rotating among a variety of countries.

Sex trafficking remains a global problem, and many of those who have traveled with Crooked Trails on these trips return inspired to educate others and share their experiences. They continue to raise money to support the NGOs they visited on their trips and give time and money to local organizations fighting the problem in their own backyards. “Once you see it, you can’t unsee it,” Mackay said. “Everybody has something that pulls a trigger for them about certain issues. For me, that issue is child sexual slavery. It is the most heinous crime on the planet, and I feel like I have to do something. I can do something. I can’t turn my back.”